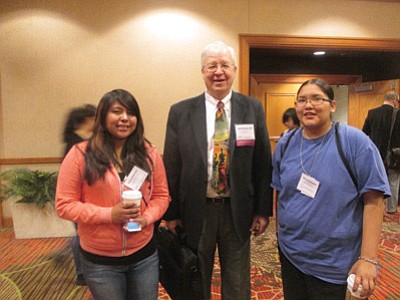 Lomabalaquihoya said the NAU Broadcast Camp was awesome because it taught her new video techniques and opened her mind to new ideas. She was among about 20 high school students from throughout the state.

"We learned about different types of microphones and lighting," she said.

Toni DeAztlan-Smith, producer and lead teacher for the broadcast camp, said she was impressed with Lomabalaquihoya's talent and attitude, especially during the live-to-tape newscast that the group produced.

"In addition to running the teleprompter during the show, she shot and co-produced a story on overcrowding at the Flagstaff Humane Center, which was broadcast on the regular NAZ TV Today newscast, which airs across Northern Arizona on Suddenlink Channel 4. She did an amazing job and I hope to see her again next year," she said.

The students also had a chance to visit KNAU to broadcast on radio. During the camp, Lomabalaquihoya said the students produced several videos and performed a mock newscast. One of the video news spots was about dogs getting spayed and neutered.

The students worked in trios with one student on camera, the second filming the video and the third on audio.

"This will help me improve on my video news and camera work during interviews this coming school year," she said.

The students had several teachers to work with during the broadcast camp.

DeAztlan-Smith was the lead teacher, but she had help from Aaron Benally, Megan Babbitt and Alex Leefer.

Lomabalaquihoya said this broadcast camp was important to her because she likes video news. She said the broadcast camp would motivate her to do more with video and media at Hopi High because she finds that it's fun, especially when she gets to cover basketball.

The broadcast camp also motivated Lomabalaquihoya to follow her inclination to major in communications at NAU after she graduates from Hopi High next year.

"NAU has a lot of opportunities for media, radio and journalism," she said. "I also want to attend the NAU Broadcast Camp next year."

Lomabalaquihoya said it was also fun making new friends and participating in the mock newscast.

"It was a great experience so I'm thankful to everybody who helped," she said.

Navajo Prep, Flagstaff, Monument Valley, Tuba City, Mesa and Phoenix were among the schools represented at the camp.

Lomabalaquihoya also attended a radio conference with her godmother Monica Nuvamsa in Albuquerque at KUNM June 11-13.

"I learned pointers on radio," she said.

Lomabalaquihoya had a chance to meet Tara Gatewood from Native America Calling. She learned that in radio a lot of people work together to make programs successful.