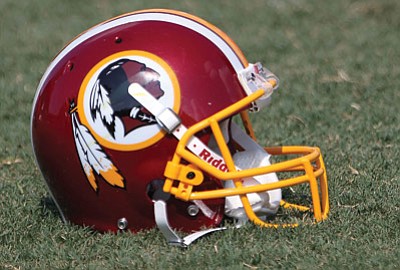 On July 8, a federal judge in Virginia granted summary judgment to opponents of the Washington Redskins name, rejecting all the team’s challenges to that trademark ruling.

WASHINGTON - A very happy Amanda Blackhorse welcomed the latest victory July 8 in her long-running feud over the Washington Redskins name, which Blackhorse, who is Navajo, says is racist and should not have government trademark protection.

The U.S. Patent and Trademark Office ruled against the team last summer and a federal judge in Virginia granted summary judgment July 8 to opponents of the name, rejecting all the team's challenges to that trademark ruling.

Team officials said they plan to continue the fight and "look forward to winning on appeal after a fair and impartial review of the case."

But Blackhorse, from Kayenta, and one of five Native Americans who challenged the trademark, said in a statement released by her lawyers that the ruling is about "humanizing the indigenous identity."

The ruling is the latest in a fight that stretches back to 1992, when a separate group of Native Americans first challenged the team's name.

In both cases, the opponents asked the trademark office to strip the team of its trademark, arguing that the law does now allow a trademark that may disparage a group.

Even though the trademark office agreed in June 2014 to cancel the trademark, that won't take effect while legal appeals are pending. The team still holds a trademark on the name.

Should it ultimately lose, it could still use the name but could not prevent others from using - or selling - items with the name or logo.

Blackhorse, who has been battling the team for nine years, could not be reached for comment after the ruling. But her lawyers said their case has "demonstrated the disparaging nature of the team's name."

"Today's ruling by the District Court resoundingly affirmed the Trademark Office's decision," said Jesse Witten, the attorney for Blackhorse and the others, in the statement.

But Washington Redskins President Bruce Allen said his confidence is rooted in history.

"We are convinced we will win because the facts and the law are on the side of our franchise," he said in a statement released by the team, adding that the franchise has "proudly used the name Redskins for more than 80 years."

The team has long argued that, far from being disparaging, the name Redskins is used as a sign of respect for Native Americans.

But Blackhorse said in the statement that she was "very happy with the ruling," and proud of the national attention that has been brought to "the problems with the team's name."

The team has been using the name Redskins since 1933, according to the opinion by U.S. District Judge Gerald Bruce Lee, and the name became an approved and registered trademark in 1967. Four other variations of the name were also registered between 1974 and 1990, the opinion said.

Lee said the first informal complaints about the name came in the early 1970s, and the first official challenge came in 1992, when Suzan Harjo and six other Native Americans first petitioned the trademark office.