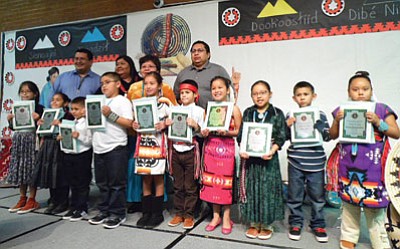 At a Jan. 13 evening award ceremony, Ella Bedonie, one of the Primary School's Navajo language teachers said she wanted to thank all the parents and grandparents who speak daily Navajo or Hopi language to their kids.

"I tell the students, go home and practice your new language lessons with your families," she said. "Sometimes the parents say, 'we are learning from our children' and these conversation homework exchanges with their tribal language is just so important. It helps reinforce and strengthen what we are doing in our classrooms and it shows the students that their language is very important, that it's a sacred thing to keep our languages alive."

Former Tuba City teacher and former Coconino County Supervisor Louise Yellowman gave the keynote address. She spoke about her personal journey to help foster tribal language programs in the Tuba City and Gap-Bodaway areas in the 1960s and how she came to learn how important her Navajo language would be in serving her community and her tribe in the political realm later in life.

"Never forget your grandmother and grandfather," Yellowman said "It's because of them that we have these successful language programs today. Many of our parents and grandparents could not speak English, so we had to communicate with them in our own tribal language and its because of that love for them we needed to express our work or play activity, ceremonial activity and even daily chores using our tribal language."

Yellowman added it is good the students are encouraged to use both Navajo and Hopi languages in their classroom and are practicing at home.

"Speaking our tribal language also reminds us to be kind and patient with one another," she said. "We don't have bad or dirty words in our tribal speech. There is always respect shown when speaking our language. There are appropriate names for our relatives and we recognize those tribal affiliations when we speak our own language. This reminds the students to be respectful to each other and their families and teachers and that is a wonderful way to share and show them how to be good responsible adults."

Royd Lee, a Navajo language teacher in his second year of teaching at Tuba City Primary expressed his appreciation for all the support and interest that parents and grandparents have shown their students.

"Teaching our students every day, this is like a partnership between the teachers and the parents and grandparents to help the students do the very best they can," Lee said. "When we have that family support, it makes all the difference in a student's success at their school work."

Dennis Bedonie served as the Master of Ceremonies for the evening. Tuba City Primary principal Sharlene Navajo helped hand out the awards to each student for the winter months.

Yellowman concluded her speech to the crowd by saying, "We must always remember, our Native words are powerful. They are sacred because they remind us that these words hold our history and our culture."