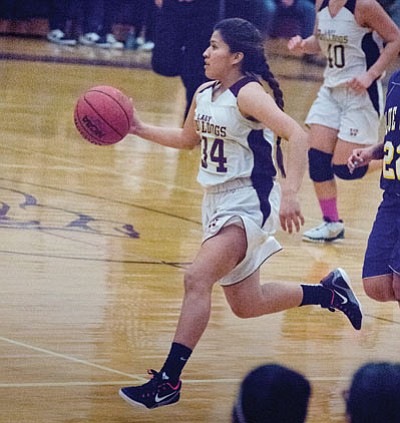 The Lady Bulldogs started out very strong with a defense that held Blue Ridge totally in check.

The Lady Yellowjackets did not score a field goal in the first half and were trailing by more than 25 points, 32-5, at intermission. When Blue Ridge scored its first field goal late in the third quarter it cut the Winslow lead to a still commanding 44-7.

Winslow led 48-7 after three quarters of play and was well on their way to victory. The game was speeded up with the running clock becuase of the massive Winslow lead. Blue Ridge scored more in the fourth quarter than they had in the rest of the game but still lost 55-18.

Shandiin Armao led all scorers with 11 points for Winslow, which had almost every player in the scoring column. The Lady Yellowjackets did not have anyone with more than seven points and most did not score at all.

Winslow plays host to the Payson Lady Longhorns on Thursday and travel to Show Low on Friday to meet the Show Low Lady Cougars.