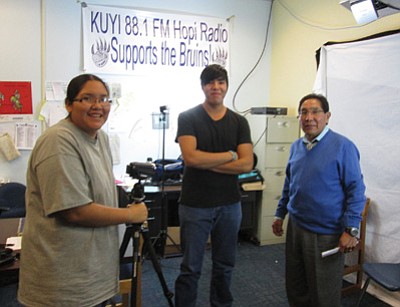 POLACCA, Ariz. - Hopi Chairman Herman Honanie said the tribe has not taken an active role in education and needs to do more for Hopi students.

"The tribal council and myself need to be more and more active and engaged in the high school. That's why we're here today," he said during a Jan. 15 visit to Hopi Jr./Sr. High School.

Honanie met with students, viewed the action during a motivational Renaissance Day and was interviewed by the Hopi High School video news team as well as Bruin Times Editor Jennifer Huma.

Honanie heard concerns about bullying and funding. He said the Hopi Tribal Council, school administration and teachers all have an obligation to improve education at the school.

He came to the school to hear about the students' educational experiences and start a dialogue with everybody involved in Hopi education.

"You, the youth, have potential," he told the students.

Honanie said improving the school and curriculum will be a long process that calls for everybody to come together including educators, parents, tribal council members and students.

"Our youth are intelligent and energetic, but I know we're lacking resources," he said.

Honanie said he wants to see the return of the band program to Hopi. The Bruins lost their band teacher last year and haven't found a replacement.

Honanie advised the students to maximize their time in school and keep their focus on their education.

"Only you as individuals can do that," he said. "Your goal should be to live a quality life. Stay away from substance abuse."

Star Not-Afraid, a newscaster for the Hopi High video news program, told the chairman he was getting ready to go to Northern Arizona University (NAU) in Flagstaff. However, he had heard too many stories about college students from Hopi not getting enough funding from the Hopi Tribe. Honanie congratulated Not-Afraid on preparing to go to NAU and told him that the scholarships are based on need.

"I have heard that money is tight and low, and we need to take a look at that," he said. "We need more funds for grants and scholarships. College students shouldn't have to worry about paying their bills."

Honanie also addressed the lack of youth centers on the Hopi Reservation saying it leaves the youth with a lack of activities. He said youth need to get creative and approach the Hopi Tribal Council to say what they need.

The chairman was born in Keams Canyon, raised on Hopi and attended Hopi schools until the eighth grade before going to Phoenix Indian High School because Hopi High School didn't exist yet.

"I had the option of going off to Flagstaff or Winslow, but I was not informed of that so I thought it was either Phoenix Indian High School or Sherman," he recalled.

Honanie said in today's educational world students face a tougher curriculum and standards, but emphasized that they have to apply themselves to get a quality education.