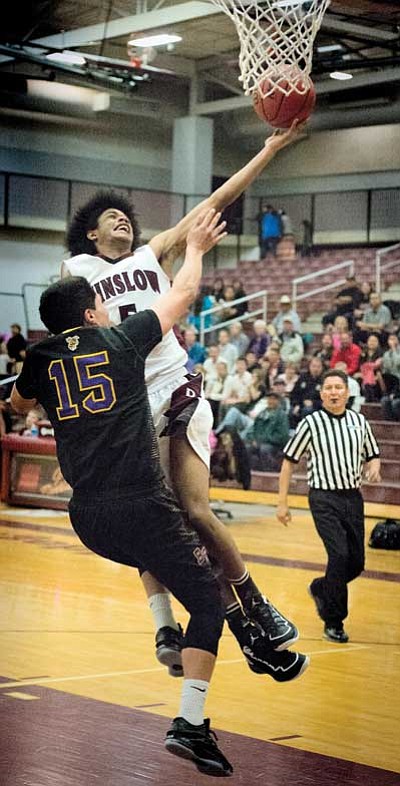 The win improved Winslow's record to an impressive 16-4 and dropped Blue Ridge's to 18-9.

It was the second straight close game win for the Bulldogs with an important Saturday game at Kayenta with the Monument Valley Mustangs. ahead.

The game started with both teams scoring well and the first quarter ended with the score tied 19-19.

Blue Ridge had a four point 35-31 lead at the half but Winslow scored 26 points in the third quarter to take a 57-49 lead going into the final period. Blue Ridge cut into that margin but the Bulldogs prevailed for the 73-68 victory.

McKay Berges led all scorers with 26 points for Blue Ridge, half of them in the fourth quarter when he hit six of seven free throws and three field goals, one a three pointer. Chris Williams was also in double figures for the Yellowjackets with 24 points but only five other Yellowjackets scored and none had five points or more.

Akkeem Foster led Winslow with 20 points, 11 of them in the third quarter when the Bulldogs took the lead.

The Bulldogs play host to the Payson Longhorns on Thursday and travel to Show Low on Friday to meet the Show Low Cougars.