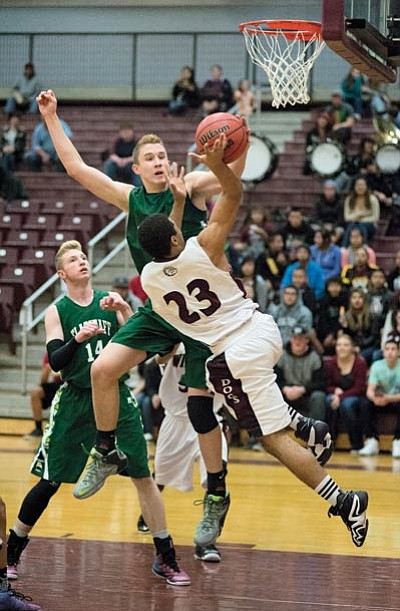 WINSLOW, Ariz. - The Flagstaff Eagles nipped the Winslow Bulldogs 61-54 in a contest between two excellent basketball teams played in Winslow last Wednesday. The win improved Flagstaff's record to 13-3 for the season and left Winslow with a still impressive 12-4 for the season.

Flagstaff sped to a 24-16 lead in the first quarter but the Bulldogs had trimmed that lead to a single basket 31-29 advantage by the intermission. In the third quarter the teams played on equal terms and were tied 44-44 entering the final period of play.

The Eagles used their advantage at the charity stripe in the final period to outscore the Bulldogs 17-10 and win the game. Flagstaff hit nine of 12 free throws in that quarter to just three of five for the Bulldogs. For the entire game Flagstaff made 20 of 25 free throws while Winslow was eight of 10.

Akkeem Foster led all scorers with 23 points for Winslow but was the only Bulldog in double figures. Dalvin Benally and Tylon Yazzie both tallied nine points for the Bulldogs. Brett Morrow led Flagstaff with 16 points. Kaleb Sandoval with 11 points and Austin Brain with 10 points were also in double figures for the Eagles.

There was no girls game that night. The Bulldogs and Lady Bulldogs were scheduled to play the Mingus Marauders and Lady Marauders at Cottonwood on Monday after the Observer went to print and entertain the Blue Ridge Yellowjackets and Lady Yellowjackets on Friday. Both teams will journey to Kayenta on Saturday to meet the Monument Valley Mustangs and Lady Mustangs.