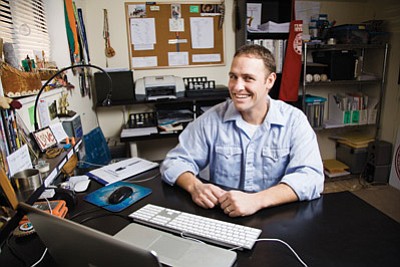 Flagstaff filmmaker Travis Holt Hamilton in his production office. Hamilton is completing production of his new film “Legends From the Sky.” Ryan Williams/NHO

While the budget for "Legends" is bigger than all of Hamilton's previous movies put together, it is still a low budget film. The 110 special/visual effects in the film are not cheap.

"I didn't realize how expensive visual effects are," Hamilton said. "This is our first movie with special effects."

Hamilton is trying to raise $30,000 through a Kickstarter campaign by Jan. 20.

Hamilton said through the Kickstarter campaign people can pre-order the movie. A DVD or digital copy of the movie will be sent to contributors who help get the film made.

Hamilton said the film will get finished regardless of the results of the Kickstarter campaign and its world premiere will go forward on Jan. 22 and hit other theaters on Jan. 30.

"One of the actors in the film, James Bilagody, was telling me that he thinks that it is really special to have a world premiere," Hamilton said. "That Native country needs this for each other. [He said], 'We're valuable and why can't we have a red carpet with a Native film just like everyone else?' He put that thought in my mind. I feel like it rang a lot of truth."

The world premiere is Hamilton's way of thanking Native country for its support of his films and is a great way to highlight the actors in the film.

Hamilton is no stranger to making films with Native American subject matter. His film credits include "More Than Frybread," and "Blue Gap Boy'z." He wrote his first full length feature film, "Turquoise Rose" while deployed to the Middle East with the U.S. Military. But "Legends From the Sky" is a new genre for him. It is a Native American science fiction thriller filmed on the Navajo and the Makah reservations.

The film is about a Native American veteran burdened by survivor's guilt after a disastrous military tour who is forced to search for his missing grandfather after his ancestral land is mysteriously taken over by an Unknown Federal Organization (UFO).

Hamilton said he works to challenge people's stereotypes and misconceptions about Native Americans.

"Didn't they all live in teepees?" Hamilton said he is often asked. "The Navajo have never lived in teepees. Where is the [dis]connect? And I realized where the teaching was, it was Hollywood."

Put that together with his love of filmmaking and Hamilton found a way to show how he saw Native country and his own experience with it. That includes getting to know the communities he shoots films in, learning how people view life and how those views are different than his - celebrating the differences.

"Legends" includes 15 minutes of spoken Navajo, subtitled as much as possible into English, between two Navajo characters.

"Not that we're saving the world or anything," Hamilton said. "But there's magic, too, when you hear a story in its first language. Maybe it gives a little more enjoyment for those who are fluent."

"There's more talent, there has to be more talent," Hamilton said. "There needs to be more options - so that is what we have tried to do, to develop the depth and width of Native talent."

The communities on the reservation are very different than where a typical film shoot takes place. The result is that many locals get to play a part in the movie.

The value that each community brings to the film is in the form of suggestions on how to shoot a scene more accurately or having a character say something in a way that makes it more funny or more real.

"I'm always open... I don't claim to know everything," Hamilton said. "If we're all on the same page, all trying to tell the best story that we can, every step is what makes it a little bit better."

When shooting in a community like Tsalie, where there is not a Wal-Mart, only one gas station, and no stoplights through town, the camaraderie of everyone sleeping in the Diné College dorms and eating at the cafeteria helps the film in the long run.

"It was great because at the same time, everybody, the crew, the cast we just got to know each other," Hamilton said. "It becomes more of a... I think everyone puts more of their heart into it. We're looking for people who, yes, we're all trying to make a living as well and I get that but at the same time there's people who have their heart in it just as much, that's important."

The film opens Jan. 30 in the following theaters:

More information about the Kickstarter campaign is available at https://www.kickstarter.com/projects/holthamilton/legends-from-the-sky.

More information about the film is available at http://www.holthamilton.com/#legends-from-the-sky.