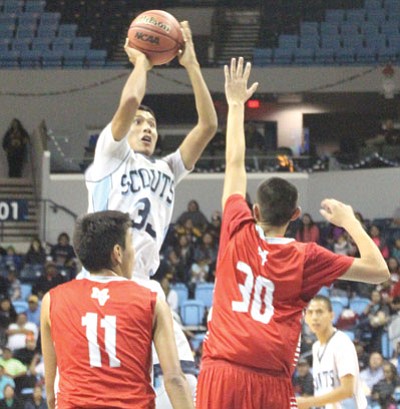 A Window Rock Scouts player shoots over Monument Valley defenders during the Scouts’ 56-41 win in the Tournament of Champions. Photo/Anton Wero

The 2014 3A Girls North Tournament of Champions third place trophy winner was the Tuba City Lady Warriors (10-4) who beat the Window Rock Lady Fighting Scouts (7-7), 61-41. The Monument Valley Lady Mustangs (7-4) finished in fifth place with a 59-54 win over the Chinle Lady Wildcats (7-7)

"We want our kids to play consistently - take care of the ball and to be patient," he said.

Monument Valley Mustang's coach Rich Beeler said his players would play to the best of their abilities.

"We are going to play basketball and see where things go," Beeler said.

Wauneka and Long continued to lead the Scouts' scoring in the second quarter with help from Shammond Goodman's three pointer and a free throw by Sylvestor Begaye, outscoring the Mustangs. Monument Valley's Ty Phillips scored seven points of his team game high 13 points in the second period, and along with baskets by Joshua Young kept pace with the Scouts, who led 25-20 at the half.

The Scouts outscored the Mustangs by a single point in the third period to keep control of the game, 32-26.

The Scout's inside game proved to be effective in the final frame because each trip in the paint led to trips to the free throw line. The Scouts converted on 10 of 18 free throws and along with Wauneka's ten point of his game high 22 points, the Scouts dominated the final quarter and coasted to a 56-41 win.

The Scout's Mendoza, agreed with other team coaches playing in the tournament.

"All of us (teams) in the tournament are getting a good look at each other, we get to see our competition in January," Medoza said.

Long and Jacob Emerson contributed 12 points and 10 points respectively for the Scouts.

In the opening quarter, Tuba City Lady Warrior's Samytha Parrish went inside and outside the paint for nine points of her game high 28 points putting the game out of reach for Window Rock early on. The Window Rock Lady Scouts were able to answer with eight points from Danielle Smiley, D'Ovionn Wagner and Domonique Chee.

Tiara Francis had seven points of her team game high ten points in the second quarter. With scoring from Sharia Betsoi, LaTanya Dodson and Chee, the Lady Scouts were able to cut the lead to three points, 25-22. Parrish kept on pace for the Lady Warriors, increasingly scoring at will and contributed six points of Tuba City's 12 points for the quarter.

Parrish, Nykesha Todecheene, Keisha Classay and Autumn ByJoe combined for 22 points in the third quarter and gave Tuba City a 47-26 lead. The Lady Scouts scored four points in the quarter.

The Lady Warriors were six of eight from the charity stripe and added four field goals for a total of 14 points, while the six Lady Scouts scored 15 points in the final quarter, losing 61-41.

"Go out there - play hard, believe in yourself play as a team, if somebody messes up, talk to them - communicate. Stay out of foul trouble," were Pinon head coach Jonath Gee's pre-game remarks before Pinon's match-up with the Chinle Wildcats.

The Eagles were able to take the ball inside the paint for points, a basket and one on three occasions. The Eagle's Bert, Nez and Begay were aided by points from LeSean Segay, Milton Tso and Donavon Tso for 17 more points and took a ten point advantage at the intermission, 34-24.

During the break Gee said his message to the Eagles was to play defense.

The Pinon's pressure defense held Chinle to only 16 points. Six Wildcats scored in the third quarter. The Tso brothers, Bert, Nez and Begay scored 18 points for the Eagles to take a 52-40 lead into the final frame.

"Overall the tournament was a great experience, we are happy," Gee said. "They were able to include us and, being a small school, we were able to compete with larger schools. It showed us where we are and we got to see our competition for January."

Six different Lady Wildcats led the scoring for the Lady Wildcats, who put together 23 points and took the first period lead, including Hasbah DeJolie's eight points. DeJolie had a team game high of 14 points. Monument Valley Lady Mustang's Nizhoni Whitehorse, who had a game high 17 points, scored seven points in the first quarter with four other Lady Mustangs adding eight points only to trail 23-15.

The Lady Mustangs outscored the Lady Wildcats in the second frame, 13 to 10, cutting the eight-point deficit and trailed, 33-28 at the half.

Monument Valley had five Lady Mustangs combine for a total of 19 points, while the Lady Wildcats of Chinle could only score nine points and fell behind, 47-42 in the third quarter. Both teams scored 12 points in the fourth quarter. Monument Valley came out on top 59-54.

Monument Valley head coach Sophia Parrish said after the game that her team gained a lot of experience, individually and as a team.

"This tournament showed us our strengths and weakness," she said, "(The tournament) showed us what we need to work on. We got to see who we will be playing in district - an insight on what we are to prepare for in district play."

"We are focusing on defense and rebounding," Butler said. "We are now playing as a team, they are working hard, we are coming around, we are getting better."