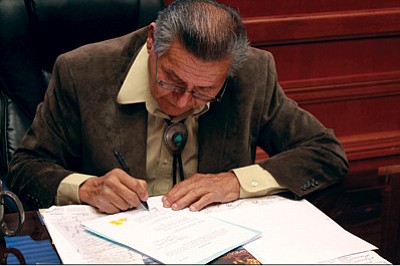 Navajo Nation President Ben Shelly said the Navajo people must be involved in the decision making process on whether or not to eliminate the Navajo language fluency requirements for candidates running for president. Photo/Rick Abasta

WINDOW ROCK, Ariz. - Navajo Nation President Ben Shelly again vetoed legislation that would ease the fluency requirement in the Navajo Nation Election Code for those seeking the office of the president or vice president.

In October a similar effort was made to change the fluency language in the election code, but for all tribal offices. Shelly vetoed that language as well.

On Dec. 31 in his presidential veto, Shelly said that he articulated his reasons for his original veto of the legislation in October and that his feelings on the matter have not changed.

"My reasons were that a thoughtful, deliberative conversation should occur regarding the qualifications an individual must meet in order to lead the people," Shelly said. "This conversation has yet to occur..."

Shelly also reiterated that while the Navajo Nation Council set the requirements for political offices, the recent changes have been piecemeal and changed through council resolutions and Supreme Court opinions. He agreed that an overhaul needed to occur that ensures the laws are clear, unambiguous and fair.

"However, on something as important and decisive as the issues facing our Nation today, change needs to be done through consultation and a referendum of the people," Shelly said. "It [is] the people's right to determine this, not myself, [the] council or the courts."