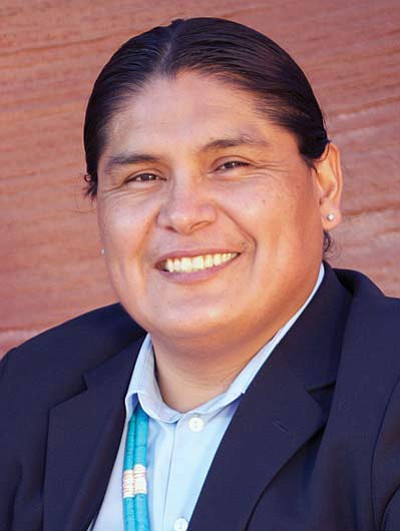 Chris Deschene filed paperwork on Dec. 29 with the Office of Hearings and Appeals to void the decision disqualifying him from running for Navajo Nation president. Submitted photo

On Dec. 29, Deschene's team filed a motion to vacate the order from the Office of Hearings and Appeals because President Ben Shelly fired Richie Nez, the hearing officer, for not meeting the qualifications for his position. The motion claims that because Nez was not qualified for his position he had no authority to issue any orders and, therefore, his order to disqualify Deschene from the presidential race is void.

The proposed schedule was:

At the same time, the legislation would provide $317,000 to the Navajo Nation Election Administration to put on the elections.

The legislation also states that only the 17 candidates who ran in the 2014 primary "shall be qualified for the special run-off election if they choose to do so."

The council also voted to pardon the nine members of the Navajo Board of Election Supervisors (NBOES) who Navajo Nation Supreme Court Chief Justice Herb Yazzie held in contempt on Oct. 31. He issued the order because of the supervisors' refusal to comply with a Supreme Court order to remove Deschene from the presidential ballot and replace his name with third-place primary finisher Russell Begaye's name.

The legislation stated that the court order failed to expressly identify the Election Supervisors to carry out the act of removing Deschene from the ballot, but issued the order to the Navajo Election Administration.

The legislation also stated, "The NBOES were not given due process and equal protection and were not provided with individual hearings to allow the members to defend themselves."

Tsosie had previously stated that the reinstatement of the board member was necessary in order to certify the outcome of the election.

A memo sent to Shelly and Speaker Pro Tem LoRenzo Bates by the Navajo Department of Justice concluded that the Navajo Nation president "may continue in office because the current president's term ends when a newly elected president is sworn into office."

The Department of Justice memo said there was nothing in the Navajo code supporting a council's action to appoint a pro tem speaker who could serve as interim president. The memo said even if the council could appoint a permanent speaker on Jan. 14, 2015, Navajo code sections say that service by the speaker as president shall not create a vacancy in the office of the speaker.

With more changes in the law from 1990-2005 and after 2005, the Justice Department concluded that "rather than stretching the meaning of 'vacancy' beyond what is supported by the code, and bring back the chairmanship position (however brief), a more reasonable approach would be to have President Shelly continue in office until a new president is elected and can be sworn into office."