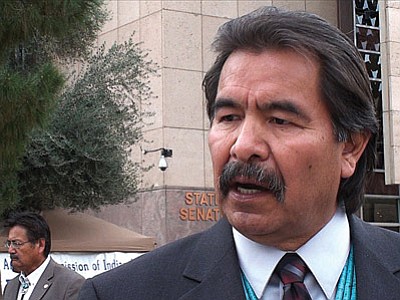 PHOENIX - Lawmakers representing the state's Native American communities say they won't give up the fight for what they call their fair share of state tax revenues.

For at least 20 years, legislators have introduced bills to change the way the state distributes certain tax revenues, a portion of which now goes to counties and cities - but not tribes, said state Sen. Carlyle Begay, D-Ganado.

The two bills this session that address this issue missed Friday's deadline to have a hearing and committee vote. And because the two bills haven't had either, they're essentially dead.

"It's been a consistent effort for many years now," Begay said. "I have a lot of confidence that we'll be able to pass a version of this bill in the next couple years."

At a Native American caucus meeting earlier this week, leaders tried to rally support for the bills. They said the state receives tens of millions in "transaction privilege taxes" - essentially sales taxes - from sources located on reservations. Yet, Arizona does not share any portion of those funds with the state's 22 tribes.

"Native American nations, while sovereign entities, continue to contribute to Arizona's economy," Rep. Albert Hale, D-St. Michaels, said in a Jan. 21 news release. "With that in mind, it is important that these nations receive their fair share of the taxes they collect for the state."

In fiscal 2014, the state collected roughly $46 million in taxes from people and businesses on reservations, according to the Arizona Department of Revenue.

The two bills would have given the state's tribes a portion of those revenues, but the bills differ in how much the state would allocate to the tribes and how the funds would be used.

For years, the efforts have failed to gain traction in the Republican-led legislature. Hale said he still has hopes for HB 2156, which proposes the state return 50 percent of the revenue collected from the tribes. Without success, he's tried to pass similar versions of the bill since he's been in office for the past 13 years.

He said the counties and cities that receive that money now don't want to see their amounts reduced.

"They are resistant to it," he said.

Begay introduced SB 1394, which would have established a rural and tribal infrastructure authority. The authority would have used the privilege-tax funds for projects. He said his bill has more support than previous versions.

"My bill neutralizes opposition," Begay said. "It's an equal investment that's beneficial to the state as a whole."

Native American leaders pointed out that tribes also contribute other funds to the state.

Tribal gaming has given more than $1 billion in shared revenues to Arizona since fiscal 2004, said Valerie Spicer, executive director of the Arizona Indian Gaming Association.

That money has gone toward Arizona schools, hospitals, tourism, wildlife conservation, cities and towns, according to the association.