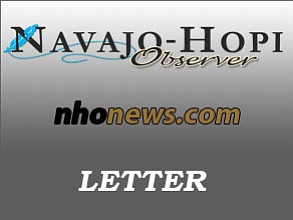 Letter to the editor:

As a youth, I remember my late grandfather, who always talked to us about standing up for our Apache people and protecting what belongs to us as Apaches. That includes our water, our land, our natural resources and our identity as being Apaches.

This is why I am speaking out against what is happening to us as Apaches and many of you don't know the real story.

The Southeast Arizona Land Exchange Bill that was passed in December 2014 sabotages one of the most important and basic environmental and cultural protection laws in the U.S., which is the National Environmental Policy Act (NEPA).

Under NEPA law, the public would have been able to comment and obtain information from the United States Forest Service about the significant environmental, cultural and human rights impacts and harms caused by this mine.

Exempting the mine's structure and plan of operation from NEPA is like taking away the Magna Carta or being exempt from the U.S. Constitution or taking away the Bill of Rights.

The USFS should be required by federal law to describe all of the potential impacts and harms of this mine to the land, water and air pollution and human and cultural and historical harms in the so called Environmental Impact Statement (EIS).

Where is the review of what efforts the mining company will have to make to protect the priceless cultural, historical, Native American, riparian, recreational and environmental values at stake here?

BHP and Rio Tinto, who are foreign mining companies, have horrendous environmental and human rights records at their third world mine sites, but also at their U.S. and other non-third world mining propertites.

Oak Flat was protected by President Dwight D. Eisenhower and later reaffirmed by President Richard Nixon. And along came Sen. John McCain, who ran for the U.S. presidency and lost the election! In return, he helps these two foreign mining companies that associates with Iran and Iraq, to build a mine on U.S. soil on land holy and sacred to our Apaches!

Now, who will monitor the mine when they dewater and destroy the critical groundwater aquifer vital to maintaining plant and animal life of priceless Ga'an Canyon riparian wetlands and culturally significant area?

One the mine contaminates the water, it will destroy the plant and animal life and citizens in Arizona, which includes our Apache people!

LETTER: The best Congress money can buy
LETTER - Mine will affect sacred sites
Oak Flat designation a win for mine opponents, but fight may continue
Letter: Can we believe that our valuable Arizona lands can be protected?
Letter to the editor: Land exchange bill not good for tribes