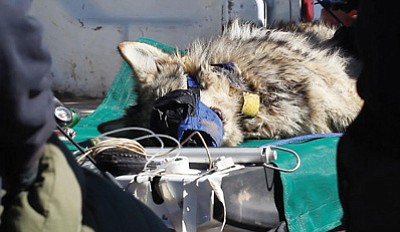 A Mexican gray wolf lies unconscious as officials evaluate it during a survey in early February. The latest survey found 109 wolves in Arizona and New Mexico. Photo by Laura Sposato

From the 1970s until 1998, not a single Mexican gray wolf roamed the Southwest. Now there are more 100 of them in Arizona and New Mexico, the U.S. Fish and Wildlife Service announced Friday.

Benjamin Tuggle, the agency's Southwest regional director, said the Mexican Wolf Interagency Field Team has counted 109 of the wolves in Arizona and New Mexico. He added there may still be more uncounted in the latest winter survey.

Tuggle said this is the largest number of wolves since efforts to reintroduce the Mexican gray wolf to the region began in 1998.

"The Mexican wolf experimental population has come a long way," he said in a conference call announcing the survey results. "I would say that we've been successful in saving the Mexican wolf from the brink of extinction."

Michael Robinson, conservation advocate with the Tucson-based Center for Biological Diversity, said his organization is excited that the Mexican gray wolf population has reached more than 100 animals. But he said recovery is a long way off because of mismanagement by wildlife officials.

"The Mexican wolf is still in grave peril," Robinson said. "To make sure that they're no longer in danger of extinction, there would have to be a total of 750 of them at a minimum distributed among three populations."

He said inbreeding, which decreases the survival rate of pups, poses the biggest threat to the wolves.

Robinson said more wolves need to be released into the wild to increase the population's genetic diversity, adding that the number of wolves released is impeded by what he considers arbitrary goals set by the service.

"We hope management will change so that we can have a lot more reproducing goals and a population that's not so vulnerable," he said.

Eva Sargent, Southwest program director for Defenders of Wildlife, said in a written statement that conservationists also need to fight a federal cap on the population of wild Mexican gray wolves.

"These imperiled wolves have made it this far; now the only way they are really going to be saved is if the service develops and implements a recovery plan that is guided by science, not politics, and makes long-term lobo recovery, not arbitrary numbers, its goal," she said.

Tuggle said the U.S. Fish and Wildlife Service is developing a strategy to increase the genetic diversity of the wolves. He said the agency plans to release more captive wolves and is working with field teams to develop new management.

"We're celebrating the increased population that we're seeing on the landscape, but we're also very vigilant in terms of making sure that we're building a genetically robust population," he said.

Jim DeVos, assistant director of the Wildlife Management Division of the Arizona Game and Fish Department, said the recovery effort is also trying to develop more social tolerance toward the Mexican gray wolf.

"The biology is, in many cases, more simple than developing social tolerance," he said on the conference call.

Tuggle said his agency aims to accomplish this by interacting with ranchers, limiting the economic impact of wolves on the landscape and limiting the number of livestock killed by wolves.

He said many collaborations account for the upward trajectory of the wolf population since 2010.

"We're pleased with the number of wild-born wolves that we have." Tuggle said. "And we think that they will continue to increase."