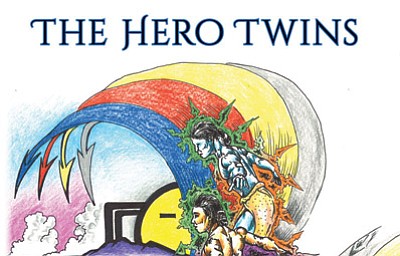 FLAGSTAFF, Ariz. - Author Jim Kristofic and illustrator Nolan Karras James will sign their new children's book, "The Hero Twins" at the Museum of Northern Arizona on Feb. 21. The story uses pictures and words to tell the story in Navajo and in English.

Kristofic is also the author of a previous book, "Navajos wear Nikes." He said that he heard the story of The Hero Twins when he was growing up in Ganado, Arizona. The story illustrates the importance of thinking, patience, persistence, bravery and reverence. The traditional story teaches that monsters are real, and that they can be beaten. But they can't be beaten alone. Family and friends must lead any warrior down the good path to victory.

The idea for the book to be in both English and Navajo was Kristofic's. While he is not fluent in Navajo, he practices it everyday. But he can listen to something someone says in Navajo and he can write it phonetically.

"It's beautiful and it helps me think in deeper ways," Kristofic said. "I really like that. So I know how to write Navajo really well and I have a pretty decent ear for it."

James speaks Navajo. He didn't learn English until he was about 17 because he would run away from the boarding schools he was sent to. He and Kristofic had some conceptual and translation meetings where they outlined what they wanted the story to look and sound like, what they wanted to include and what they thought should be left out.

"I saw Nolan, met with him and kind of went through sentence by sentence, page by page, of this story," Kristofic said. "This is the English sentence, how would this sound in Navajo."

Even then, Kristofic explained that he might not know the literal meaning of a word that James would say.

"I know it's a verb, I known where's it's supposed to be in the sentence and I understand what it's doing but when I ...hear it... I don't know what the word means," Krostofic said, adding that they gave the book to a linguist from Shiprock who said the translation worked.

What he wants people to come away with after having read the book is the same thing that he believes the Diné people have taken away from the lesson of The Hero Twins in the past.

"The Hero Twins, they don't make it alone, they're helped by deities," Kristofic said. "I think a lot of Navajo young people, at least the ones I grew up with...we got this idea that I need to be an individual, I need to be loud and extroverted. I need to go for fame at all times and I'm going to do it on my own like the American dream."

"I think the story is trying to teach people how to do it in the right way...how to do it in balance," Krisofic said. "With prayers, with chants, with guidance from people who are wiser than us. Part of it that I realized as we were working on it... it's actually teaching us lessons, where no one makes it alone."

James, who illustrated the book, is also Kristofic's stepfather. The 10 years, from sixth grade until college, that Kristofic's mother was in a relationship with James, were good years for Kristofic. He said it was where he learned to be a man.

"I mean, he's the one who taught me how to tie a tie and shave my face and he taught me a lot about, the way The Hero Twins teach, your responsibilities as a man, how you should conduct yourself," Kristofic said. "And he never preached that to me for a second, he never said, 'this is what you should do.' He just did it and I just kinda followed his lead."

That relationship, and because he grew up watching James draw and develop his skill, made James the obvious illustrator for the book.

"This book would not have happened without him," he said. "His illustrations are what is going to get people to read it and I knew that."

Kristofic said James's drawings are traditional but also in a comic book style. They are dynamic and everything looks like it is moving and under tension and that is what makes it interesting to look at.

"He created the Spiderwoman illustration first, that was the first thing he did, that was his sample," Kristofic said. "He gave it to the editor and they were (impressed) because they didn't know him, he's like unknown, he'd never done anything like that before."

James has sold his art at gathering of the Nations. He used to make airbrushed shirts and sell prints and danced at powwows, but this is his first illustration for a book.

James also taught Kristofic important lessons about how art gets made and how to do it in a life of distractions. When he was growing up, his bedroom was right next to James's studio.

"I got to see him creating, he's the only artist I knew, but he gave me confidence to see, oh this is how art gets made, and it gets made in a crappy room while you're listening to heavy metal," Kristofic said. "It's not like the muse isn't showing up anywhere, like you have to do it yourself. Like you have to be focused and make time for it and maybe get in a fight with your spouse about it, like you deal with the little distractions and everything works out okay."

Kristofic gew up on the Navajo Reservation in northeastern Arizona and has worked on and off the Rez for more than 10 years as a river guide, park ranger, journalist, ranch hand and oral historian. He's written for the Navajo Times, Arizona Highways, High Country News and Native People's Magazine. His memoir, "Navajos Wear Nikes: A Reservation Life" (University of New Mexico Press) was a finalist for the 2012 Spur Award and was named a 2011 Southwest Book of the Year.

Nolan Karras James is an artist, songwriter, powwow dancer, guitarist, and former rodeo cowboy form Pinon, Arizona. His father is Many Goats Clan and his mother is Apache.