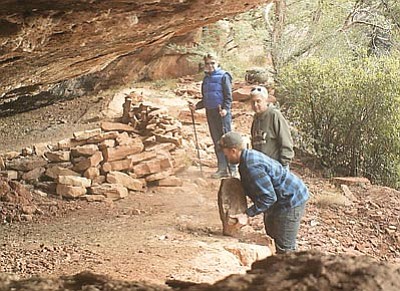 FLAGSTAFF, Ariz. - On Dec. 16, 2014 several people in Jordan Cave, in the Red Rock Ranger District, were seen digging rocks from a prehistoric floor and removing and throwing rocks over a steep embankment.

U.S. Forest Service Law Enforcement and Investigation on the Red Rock Ranger District is seeking information concerning the vandalism of the archaeological site near the Jordan Trailhead parking lot in Sedona.

The Forest Service has a photo of one person vandalizing the site while two other people watch. Forest service officials are trying to identify and locate the people in the photo who might be able to assist in the investigation regarding the vandalism.

Patrol Captain Jon Nelson said prehistoric sites like Jordan Cave are rare treasures on public lands and the Forest Service takes every effort to preserve and protect those resources.

"Once these sites are damaged, it removes a piece of the puzzle of how past communities lived and existed over time that cannot be replaced," Nelson said. "It not only destroys scientific evidence, it denies the public from seeing these areas as they were left by the Pueblo people who lived here centuries ago."

Leigh Kuwanwisiwma, director of the Hopi Cultural Preservation Office, said this site and others are considered to be Hopi ancestral sites.

"Ancestral Hopis are referred to a Hisatsinom who lived in the Verde Valley for thousands of years," he said. "Later, these people came into contact with other Hopi clans migrating from the south, later establishing villages such as Torsovi, Bluebird Village (Tuzigoot Ruin) and Wupatpela (the village on the cliff - Montezuma Castle)."

These acts of vandalism and theft to protected sites are found under the Archaeological Resource Protection Act of 1979, under Title 36 Code of Federal Regulations 261.9(g), which makes it a criminal violation under federal law. The severity of the crime ranges from a Class B Misdemeanor, which is six months in jail and a $5,000 fine, to a felony, which is one year in jail and/or $20,000 fine.

Anyone with information regarding this vandalism can contact Officer Mike O'Neil at (928) 203-7512.