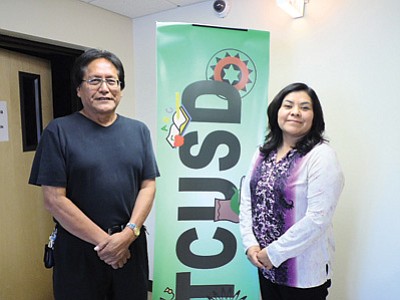 TUBA CITY, Ariz. - Tuba City Unified School District has a new Ph.D in their administrative ranks and her name is Dr. Melissa Bilagody.

Bilagody is the principal at Dzil Libei Elementary School in Cameron and, along with Dr. Justin Roberson of Eagles Nest Intermediate School, is one of two recent Tuba City District administrators to complete a doctoral degree.

Bilagody is a former Tuba City district primary, elementary, junior high and high school student. She said the district's schools propelled her and supported her along her academic path to reach her final educational goal.

After Bilagody graduated from Tuba City High School, she attended Ft. Lewis College and majored in humanities with a concentration in education. After her undergraduate work, she attended Northern Arizona University and earned her masters in Educational Leadership. She earned her doctoral degree from Pennsylvania State University in Educational Leadership.

Bilagody worked for the Tuba City District for six years before attending Penn State to complete her recent degree. Her first teaching job in the district was as the Native studies teacher at the junior high. She also taught third grade at Eagles Nest Intermediate School for five years and has been the principal at Dzil Libei for the past year.

Bilagody is the daughter of Dorothy and Brent Engle Sr. and originally lived in Prescott for the first few years of her life. Her paternal grandparents were Florence Engle from Ft. MacDowell and her paternal grandfather was Wilson Engle from Camp Verde. Her mother was born and raised in Jeddito. Bilagody's maternal grandparents are Laura Russell Cleveland also of Jeddito and her grandfather Dennis Cleveland from Greasewood, Arizona.

Bilagody said she wants to continue in her role as an administrator for the distirct.

"I also have the desire to use my research of English Language Learners (ELLs) by writing curricula which is not only relevant to our situational Native American ELL students but pertinent to the continual development of their English skills," Bilagody said. "I conducted my study for my dissertation within the Tuba City schools. I looked at the application of research based strategies which were successfully used by other minority ELL students. I recognized by my own teaching experience that there is a need, to not only employ a research-based curriculum, but to make assurances that curricula can strongly support Native American students learning styles when tailored to their needs. I feel that there is a need for the development of an ELL curriculum that can be applicable to the varying degrees of English language development amongst Native American student populations."

"I was so fascinated with the idea of him earning a doctoral degree in biology," she said. "I think this is the first time that I thought of working toward one of my own, that this was really possible for me. I feel like I was so lucky to be a part of the college prep program at Tuba City High. I also was fortunate to have some really great teachers there, including Mr. William Longreed, Mr. Manny Rai, Mrs. Sharon Capel, Mrs. Joanne Smith and Mr. Phil Giorsetti."

"Going on to college is one of those big choices and it's a considerable one because it separates you from your family and that can be a lonely experience," she said. "But the opportunity to meet a myriad of new people is just beginning and you should anticipate that. You will have that outside encouragement from these new people who believe in you and you should internalize that, so that you really do believe in yourself. Lastly, I would like to say to (the student), the hardest thing to do is to conquer your fears, the easiest thing to do is to give up. Everyone has the capacity to be the best they can be, and with this positive mindset, you can accomplish whatever your heart is set on."

Bilagody said earning a doctoral degree was not a sole endeavor.

"I am grateful to my family for their continual support and encouragement," she said. "I am most thankful for my mother's daily support and prayers. I appreciate her positive parenting and giving me strength and guidance to get to where I am today. I would also like to thank three of my professors, Dr. John Tippeconic, Dr. Joseph Martin and Dr. Louise Lockard. They not only supported me but also afforded me countless conversations when I sought their knowledge and understanding."