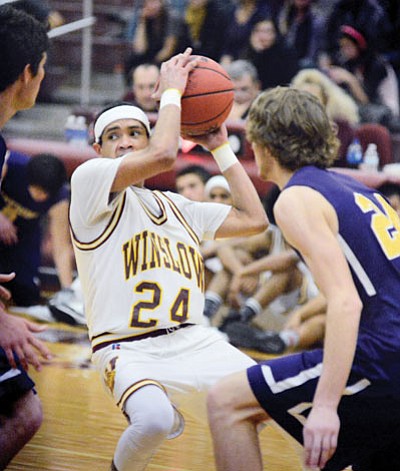 Above and below: Winslow Bulldogs and Lady Bulldogs players dominate on the court against Payson at home Jan. 29. The Lady Bulldogs came away with a 67-39 wins and the Bulldogs routed Payson 78-40. Photos/Todd Roth

The Lady Bulldogs started strong and built a commanding 23-7 lead by the end of the first quarter.

Winslow increased their lead in the second quarter and had more than doubled Payson's score by the half as they took a 45-21 lead to the locker room.

The rout continued in the third quarter, which ended with the Lady Bulldogs enjoying a 65-28 lead. The running clock due to the commanding lead meant that there was virtually no chance of a Payson comeback.

Payson did not have a player in double figures. Rachel Knauer led Payson with seven points.

The Bulldogs defeated the visiting Longhorns handily 78-40 in the boys' game.

Winslow had a double digit 27-15 lead at the end of the first quarter. The Bulldogs doubled the score on Payson by the intermission with a 52-26 advantage and were up 67-35 after three quarters.

Trelonnie Sanders led all scorers with 19 points for Winslow. Tylon Yazzie, with 12 points, and Savion Fuller, with 10 points, were also in double figures for the Bulldogs and Kordell McReeves scored nine pointss.

Chas Davis led Payson with 17 points and was the only Longhorn in double figures.

The Winslow teams played host to Window Rock Feb. 3 and will play host to Safford on Thursday and Snowflake on Friday.