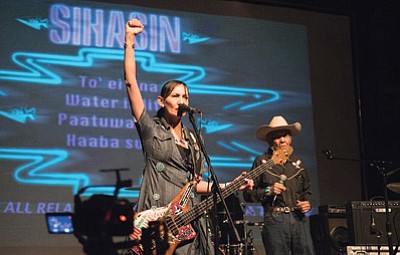 Sihasin performs at Rumble on the Mountain at the Orpheum Theater Jan. 24. Submitted photo

FLAGSTAFF, Ariz. - On Jan. 24 at the Orpheum Theater in downtown Flagstaff, the Rumble on the Mountain event took place to bring awareness about the sacredness of water, sustainability and the importance of these issues to the community.

Rumble on the Mountain ran at the same time as the "Dew Downtown," an event sponsored by the city of Flagstaff, which used 475,000 gallons of potable drinking water to create a snow slope on north San Francisco Street for skiers and snowboarders.

Rumble on the Mountain also drew attention to the tumultuous debate centered on the San Francisco Peaks between Arizona's Native American tribes, Snowbowl and the city of Flagstaff.

Making artificial snow from reclaimed water for skiing and winter sports activities has created divisions in the northern Arizona community as both tribes and conservation groups strive to protect what they hold to be a sacred place and a natural ecosystem that is under threat of contamination.

Rumble on the Mountain featured music by Pato Banton, Sihasin, The Yoties and many more. The Sierra Club, Friends of Flagstaff's Future, The Springs Institute and the Grand Canyon Trust all made presentations. In addition to the music and speakers, Supai elder Rex Tolousi gave a message of prayer and former Hopi Tribal Chairman and Black Mesa Trust Director Vernon Masayesya gave an address by video.

"Rumble on the Mountain is a concert to celebrate the sacredness of water...to remind ourselves that we are guests in this world, blessed by the Creator to experience life and responsible to honor the infinite wisdom demonstrated in the life cycles around us... we are members of a collective universe," said event organizer Ed Kabotie.

Rumble on the Mountain is reference to the recent earthquake that shook northern Arizona, specifically the Flagstaff area.