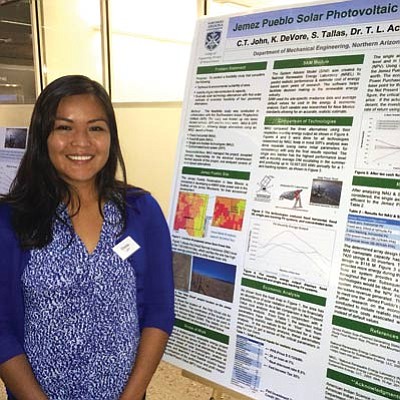 It was ideal timing for NAU mechanical engineering graduate student Cherise John, who used the project for her thesis, which she will present this semester.

"The pueblo is looking to generate some sort of income so part of what we did was create an economic analysis for building a large-scale photovoltaic system," explained John, who worked on the project with students from New Mexico's Southwestern Indian Polytechnic Institute.

Building a 40-megawatt photovoltaic system and connecting it to the power grid could cost the pueblo $90 million. John and her colleagues determined that the Jemez Pueblo could provide energy for the reservation and turn a profit if tribal leaders negotiated a standard purchase price with the power company. The next phase of research is a transmission study to determine how much power the tribe could add to the grid.

"Projects like this one give exposure to students who work on renewable energy technologies and learn what it means to work for a tribal community in the process," Khatibi said.

"It is important for students to work through some of the decisions tribes have to make when they are considering these renewable technologies," Khatibi added.

"The reason I wanted to become an engineer is because I grew up between two mine sites and two power plants. I saw the pollution and I understood the economic side of it," said John, whose parents worked at the power plant.

Last month, John traveled to ASU to present her findings to tribal leaders and the U.S. Secretary of the Department of Energy, Ernest Moniz.