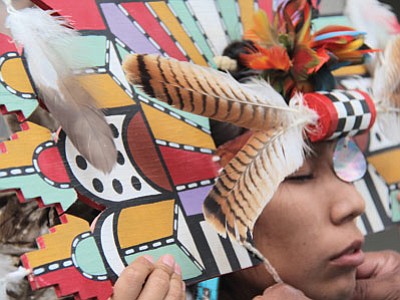 For only the fifth time in the past 15 years, a majority of the state's 22 tribes have gathered to promote tourism for Native Arizona, one organizer said.

Donovan Hanley, president of the Arizona American Indian Tourism Association, said it's "pretty unique" to have all the tribes together.

Organizers expected a large crowd to attend the Arizona Indian Festival at Scottsdale Civic Park, which ran through Jan. 31.

"It's a very interesting gathering of tribes, several I have never even heard of," the 65-year-old said.

Organizers said they hope the exposure will entice people to come back to visit Native Arizona.

"The festival is a pageantry of culture," Hanley said. "It's song and dance and food. We want to touch all the senses for everyone."

Tourism is Arizona's No. 1 export industry, bringing in $19.3 billion in 2012, according to the Arizona Office of Tourism. And the state's rich Native American culture attracts a significant amount of that.

For years, the state and tribal associations have promoted tourism on the national and international level.

Although the 2005 study commissioned by state tourism office indicated the vast majority of visitors came from the United States, about 4 percent were international visitors.

"Tribes definitely play a role in the international marketplace," said Dawn Melvin, Arizona Office of Tourism's tribal relations manager. "In Germany, they have clubs where they have powwows and give each other Native names."

Part of Arizona's attraction comes from the variety of experiences found here: Visitors can hunt trophy elk on the San Carlos Apache tribe. They can catch a baseball game on the Salt River Pima-Maricopa Indian Community. And they can photograph exclusive views of the Grand Canyon from the Hualapai tribe's Skywalk.

The attractions often depend on the tribe's geography.

"Those tribes with less casinos in the north attract a lot of cultural tourism," Hanley said. "Those in the south with casinos and resorts rely on the attraction tourism."

"We want people to break down that stereotype of headdresses and the Plains Indian image that Hollywood has put forefront," he said. "The Southwest is totally different."