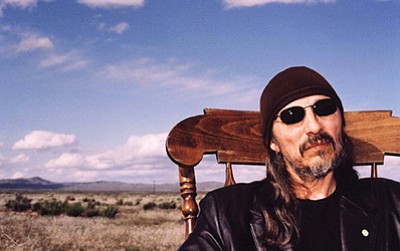 John Trudell, noted activist, poet and Native thinker, walked on this morning after a lengthy bout with cancer. His family included some of his last messages to Indian country in a press release. Among them: "I want people to remember me as they remember me."

John Trudell was a Santee Dakota activist, artist, actor, and poet, who led a life dedicated to indigenous human rights, land and language issues. He helped spark a spoken word movement that is a continuation of Native American oral traditions. He walked on Dec. 8 at the age of 69.

Born on Feb. 15, 1946 in Omaha, he spent his early years living on the Santee Reservation in northern Nebraska. His father was Santee and his mother was of Mexican Indian heritage. He had a normal life until his mother died at age 6, and the new rock and roll music resonated with him from ages 9-12. He said high school was not good for him and would enlist in the U.S. Navy from 1963 until 1967, to get away. He married Fenicia "Lou" Ordonez in 1968 in California, briefly attended college, thinking he would go into radio and broadcasting.

Everything changed in 1969 when Native American students and organizers, Trudell among them, occupied Alcatraz Island from November 20, 1969 to June 11, 1970. That group became "Indians of All Tribes," and they issued the manifesto, We Hold the Rock, and eventually the book, Alcatraz is Not an Island. The Alcatraz Occupation became an incubator for the nascent Native American rights movement, including the American Indian Movement (AIM) in Minneapolis. The legal basis for this occupation was the Treaty of Fort Laramie of 1868, which said that any abandoned federal property would revert to the Indian Nations. This treaty's legality would also inspire many more actions across Indian country. Trudell has always maintained that all these political actions were not just moral, ethical issues but were legal issues, according to Native treaty rights and federal trust responsibilities.

Trudell used his broadcasting experience on the airwaves of "Radio Free Alcatraz" (a clip from the program can be heard on the 2005 documentary Trudell). His marriage would end during this period as he become a leading Native spokesman attracting national attention. The negotiations over Alcatraz, the proposed Indian Center and the occupation itself fell apart in 1971, but so many names of Native activists, organizers, artists, writers and actors from that time would become prominent in the ensuing struggles, movement and documentation.

Events would cascade from actions related to the Raymond Yellow Thunder beating in 1972, to the nationally organized cross-country caravan Trail of Broken Treaties in 1972 that ended with the occupation of the Bureau of Indian Affairs building in Washington, D.C. and the issuance of The 20 Points Manifesto. The scattering of activists after the BIA take-over led to AIM actions at the Custer County Courthouse, followed by the 1973 Liberation/Occupation of Wounded Knee village by AIM and the Oglala Sioux Civil Rights Organization. In 1973, Trudell became the national spokesperson for AIM, a position that he held until 1979.

He believed in the Spoken Word, that it had power. He didn't think we should call our music and poetry "political or protest," as those were labels from those in control. He called them cultural realities and artistic statements: "We are speaking our truth, bringing our energy. Music is its own energy, it's good and positive in strengthening our communities."

The FBI agreed. In the documentary Trudell by Heather Rae (2005), they quote an FBI memo early on: "He is extremely eloquent, therefore extremely dangerous." They compiled a 17,000-page dossier on him, one of the longest in its history. Trudell said in the documentary, Incident at Oglala, "All I did was talk, and they cracked down hard just for that." Trudell was referring to a pivotal And Cataclysmic Moment in his life: the deaths of his wife Tina, their children Ricarda Star, Sunshine Karma, Eli Changing Sun, unborn son Josiah Hawk, and Tina's mother Leah Hicks-Manning, in a suspicious fire in their parents' house in February 1979 at the Duck Valley Reservation, Nevada. Trudell burned an American flag in protest on the steps of the FBI building in Washington, D.C., within 24 hours of the house fire. His family was known to have local enemies in law enforcement, but they could not prove it was arson even after the private investigator he hired said that the official version was practically impossible.

Trudell's movie career also created a new generation of fans with feature films like Thunderheart, a 1992 Hollywood thriller by director Michael Apted, who also swung a documentary film into the deal, Incident at Oglala, produced/narrated by Robert Redford. He was also in the 1998 seminal Native-made film, Smoke Signals, written by Sherman Alexie and directed by Chris Eyre. His great line in the film is, "It's a good day to be indigenous," in which he is again back to NDN radio roots as DJ Randy Peone of K-REZ.

Controversy occurred in 2004 when Trudell testified at the trial of AIM members, Arlo Looking Cloud and John Graham, who were sentenced to life imprisonment for the kidnapping and murder of Anna Mae Pictou-Aquash. Trudell was boycotted by Native students in Vancouver, British Columbia, and criticized by AIM hardliners. Trudell said it was a confidential matter involving Looking Cloud relieving his conscience and Trudell only talked about it after it was revealed in media accounts.