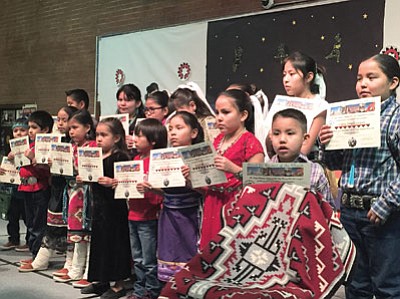 Tuba City Primary School students in the Navajo Language program show off their language skills to their parents and community at a dinner honoring their accomplishments Dec.10.Rosanda Suetopka/NHO

TUBA CITY, Ariz. - Students gathered with their parents, grandparents, teachers and community members Dec. 10 in the Tuba City Primary School cafeteria for a traditional meal to celebrate tribal language fluency in classroom programs that are part of the students' daily academic work.

Navajo language instructors Royd Lee, Ella Bedonie, and Violet Tso make sure their students have a daily lesson in the Navajo language using conversation, color and number identification, questions and descriptions of things they see every day.

The daily language routine helps to reinforce Navajo fluency and create a comfortable atmosphere for the students to exchange conversation, ideas and thoughts in their Native language.

Students who have excelled in their language programs this semester were recognized during an award ceremony. The students also gave presentations in Navajo to the visiting crowd.

The opening program was in Navajo starting with the Pledge of Allegiance by Rainee Honanie, National Anthem sung by Miara Bilagody and a welcome address from principal Dr. Justin Roberson.

"I'm very proud of our students and their awareness of their culture and the importance of their own tribal language," Roberson said. "The teachers work daily with them to increase their conversational fluency."

Students sang "We wish you a Merry Christmas" in Navajo and were presented language award certificates.