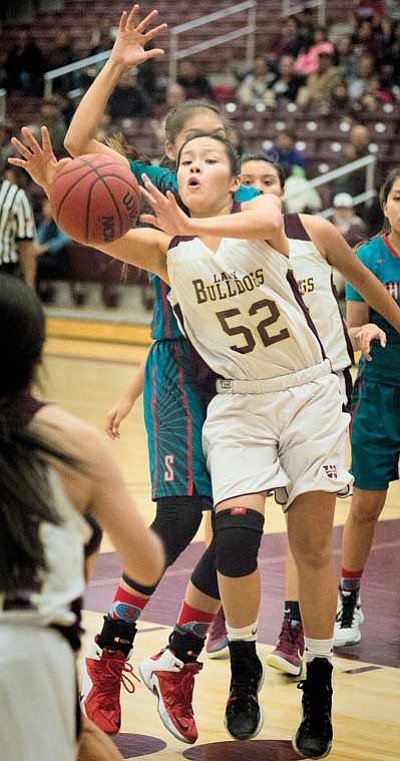 WINSLOW, Ariz. - The Shiprock Lady Chieftains won the Winslow Winter Classic with a 66-60 victory over the Winslow Lady Bulldogs Dec. 19.

It is the second time the Lady Chieftains have beaten Winslow in the tournament Shiprock improved their record to 8-1 for the season.

In the championship game, Winslow raced to a 20-9 lead in the first quarter but Shiprock came back and had a 32-25 lead at the half.

The Lady Chieftains led 52-47 after three quarters and the game was close for the rest of game. It was a much better performance for the Lady Bulldogs than their 65-33 loss to Shiprock on Saturday morning. Winslow finished the tournament with an 8-7 record.

In Saturday's game Shiprock led 16-13 after the first quarter and 35-28 at the half. The Lady Chieftains pulled away in the third quarter. Winslow did not score and trailed 54-28 going into the final period and scored only five points in the entire second half.

In the championship game Kacey Begay led Shiprock with 18 points. Tanisha Begay with 14 points and Paige Dale with 12 were also in double figures and Tyanna Harry scored nine points for the Lady Chieftains.

Winslow was led by Jaycey Sangster with 17 points. Danielle James with 16 points and Adrianna Singer with 11 were in double figures for the Lady Bulldogs.

The Lady Bulldogs opened play in the Winslow Winter Classic Tournament with a 57-41 victory over the Alchesay Lady Falcons Dec. 18. Alchesay defeated the Hopi Lady Bruins 60-49 in an earlier game that day.

Alchesay led 20-17 after the first quarter but only scored one more point than that in the last three quarters of the game. Winslow led 37-28 at the half and 48-32 after three quarters. Having to play the earlier game seemed to hurt the Lady Falcons.

The Westwood Lady Warriors defeated the Kellis Lady Cougars 53-46 in the first game on Friday. Westwood then lost to the Shiprock Lady Chieftains 66-37. Shiprock used a very effective full court press and a platoon system than probably made having to play the earlier game even more difficult for Westwood.

On Saturday, in the losers' bracket, Westwood edged Hopi 48-45 and later defeated Alchesay 44-38 to earn a berth against Winslow which they lost 60-47. In that game the Lady Bulldogs led 19-17 after the first quarter, led 30-25 at the half and 48-36 after three quarters. Danielle James and Lynnae Mitchell led Winslow with 13 points each and Jenna Yazzie and Jaycey Sangster each scored 12 points.

Hopi defeated Kellis 63-43 in the last losers' bracket game. After the final game the winning and second place teams were given shirts and an all-star team was announced. Navajo Nation President Russell Begaye was in attendance for parts of the tournament including the first Winslow-Shiprock game.