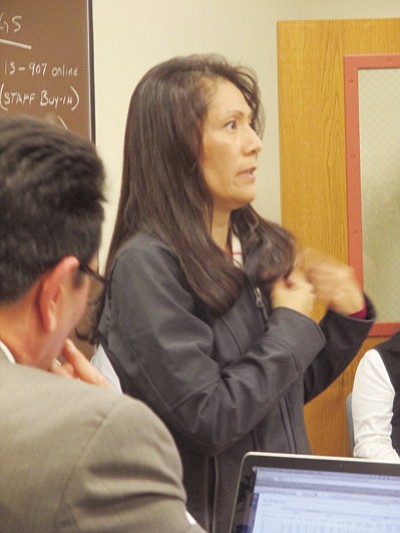 POLACCA, Ariz. - Dr. Gregory Sackos resigned as superintendent of Hopi Jr./Sr. High School during the same school board meeting that a petition was given to the board calling for him to be removed.

Sackos resigned at the Dec. 8 school board meeting. The school board accepted his resignation, effective Dec. 11, after an executive session.

Sackos resigned to take a job as interim superintendent with the Salt River Pima-Maricopa Community School, where he will be closer to his home in Scottsdale.

The Hopi Jr./Sr. High School Governing Board is expected to have a special meeting sometime this week to appoint an interim superintendent.

Charlene Youvella, a former teacher at Hopi Junior High, presented two petitions to the Governing Board during the call to the public. She presented a petition with 119 signatures calling for Sackos to be removed as superintendent. She also submitted a petition with 82 signatures calling for the recall election of school board member Troy Lomavaya.

On the proposed recall of Lomavaya, Youvella said 63 signatures were needed. Alban Naha, director of federal programs at Hopi Jr./Sr. High School, has the task of verifying the signatures of those who signed the recall petition. He said no time frame has been set for taking the next step in the recall process.

There is no formal process for recalling a superintendent because he serves at the pleasure of the school board. However, school boards can take into consideration whether they should consider a petition if it has enough signatures.

Youvella said both petitions should send a message to the governing board members that they are elected as servants of the voters. She said school board members should be accountable and responsible for their actions and for the guidance they provide to staff and students.

"It all comes down to the students. No one has listened to the voice of the students," she said. "This is not about Troy or Dr. Sackos. This is about the students."

Youvella said she asked for several months to be placed on the school board agenda to talk about the school's areas of non-compliance, but without success. She told the school board that she admonishes them to know their constituents. She said the problems deal with a lack of transparency and a lack of communication.

"Take these petitions seriously. This is not to hurt somebody, but out of concern for my son and all students," she said.

Youvella spoke during the call to the public. By law, the school board members cannot take action or respond during this time.

Sackos later told the Observer that anytime leadership takes a position that someone will take a stance against them. He said he was part of several group decisions that some people didn't like. Sackos applied for the job at Salt River before the petitions were in motion.

"Every decision I made was in the best interests of the students," he said.

Sackos wants to be home with family

Sackos did not speak about his resignation during the meeting, but he spoke to school staff briefly the next morning. He said the last year has been challenging because he has two daughters at home, 9 and 11 years old, who want him at home.

Sackos said he always took actions that he believed were best for the students and the school.

"You guys are amazing to work with and I will still see many of you," he told the staff. "I appreciate your efforts on servicing the students."

He said he met three major goals during his time as superintendent. First, to establish a system to evaluate students. He said one step is missing, but the evaluation system has improved during his time as superintendent. Second, he helped teachers use data to improve the implementation in content areas. Third, he tried to be more inclusive of getting everybody involved in Hopi Jr./Sr. High School, including the feeder schools, community and establishing partnerships with Behavioral Health and higher education.

Sackos said that during his meeting with the school board, he gave them several options for filling the post of interim superintendent. He said they talked about his resignation during executive session in case legal decisions needed to be made.

He advises that the school board get feedback from current and past students about whether they are preparing students for life after high school.

"You are laying the foundation for your future. Research and pursue your dreams," he said.