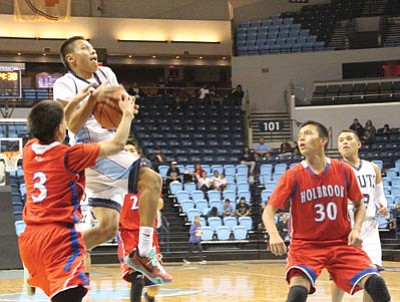 In a pre-game interview with the Fighting Scouts head coach Raul Mendoza said he didn't want his team to get behind early and play catch up.

"We don't know much about the Fighting Scouts players, but I personally know their coach well. I have coached with Mr. Mendoza for seven years and a state title, during his tenure at Holbrook," said Holbrook Roadrunners coach Delmar Johnson. "He always puts a good team together."

Johnson said the Roadrunenrs needed to play together.

"We want to get up and down the court, force turnovers and get the easy baskets," he said. "We want to play from the inside to outside, drive into the paint and dish out for three pointers."

The visiting Roadrunners quickly attacked the paint and, when that offensive game plan was defended, they passed out to the perimeter for three pointers. Benson Davis, Abrian Dickson and Mireux Begaii all hit treys.

"We like to shoot the three ball," Begaii said.

Holbrook hit four more three-pointers. Rhett Desiderio had two threes, one from NBA range, Hayden Kinlichee and Dickson added one each during a 13-point run. Holbrook outscored the host Window Rock, 18-7 to take a 11 point lead at intermission, 30-19.

"We can't let up," Johnson said during the halftime break. "We have to maintain defensive pressure."

Behind scoring from Eric Sloan, Brown, Goodman and a steal by Billy, the Fighting Scouts had a 12-point third quarter, cutting into the Roadrunner's lead 36-31.

"Our shots weren't falling," Mendoza said. "We kept getting beat in the paint for easy scores."

The Roadrunners were able to spread the floor, getting fouled while driving into the paint and converting on six of eight free throws, winning the early season match-up 47-39 and remained undefeated for the season.

"Were going to press and trap, we are young and small," said Holbrook Lady Roadrunner's coach Greg Perkins. "But we have a lot of quickness."

Window Rock's D'Ovinonn Wagner scored eight points of her game high 22 points in the first quarter, followed by scoring from Sharia Betsoi, Alicia Hale, Domonique Chee and Asia James, combining for an 18-14 lead, most of the points coming in the paint.

Window Rock with a clear height advantage, continued to score. A 20-11 effort in the second quarter gave the Lady Scouts, a 38-25 halftime lead.

"I was stressing defense. With defense, you can get turnovers that lead to easy layups," Beach said to his Lady Scouts in the locker room, at the half.

In the Lady Roadrunner's locker room, the players and coaches reflected on the first half.

"We had a bad first half, we didn't play well," Perkins said. "They moved the ball really well and got easy baskets, mostly in the paint."

The Lady Scouts had a comfortable control of the game, leading by 21 points at the end of the third quarter, 53-32. Scoring from the Lady Roadrunners Ariyana Pratt, Laurie Brown and Shoshawna Jack kept pace with the Lady Scouts.

Holbrook open the final frame with a 10-0 run and then an 11-2 run to close the gap to 59-58 with 45 seconds left in the quarter. Pratt scored 12 points of her team high 16 points. Driving the paint, senior Quanyyah Lester aided the comeback with nine points, while the Lady Roadrunners scored 28 points in the fourth quarter. Two costly turnovers by the Lady Roadrunners in the final seconds of the game proved to be the key to the Lady Scouts' 63-60 win.

"The girls finally stepped up in the final quarter and played like the way we can," Perkins said. "Good news, they showed they can come back, a plus we can take into the next game They understand what it takes to play against good teams in the north region." Pratt had 16 points, Laurie Brown and Quanyyah Lester each contributed 14 points for the Holbrook Roadrunners.