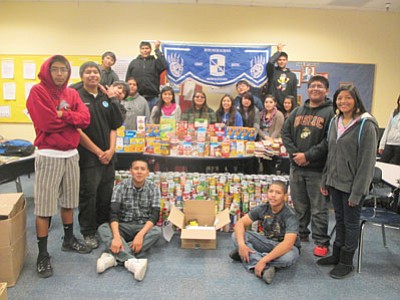 Hopi High's Junior ROTC held a food drive from Oct. 28-Nov. 18 with 924 canned goods going to those in need in Shungopavi, Kykotsmovi and Sichomovi.

Antone said there weren't many non-perishable items donated this year like last year. There were more than 600 canned goods donated last year, so this year's Junior ROTC were proud to break last year's mark.

"I really appreciated the effort by the cadets," Antone said. "Because the week before the food drive ended I didn't think we had anything, but everybody came through in the end."

Hopi High's National Honor Society (NHS) recently started its food drive by putting out donation boxes before Thanksgiving. NHS will have a cans for popcorn drive during two high school basketball games and four junior high basketball games during December. Those attending the games can bring two non-perishable food items in exchange for a bag of popcorn.

Last year, NHS gave out 200 turkey or ham meals just before Christmas. That magical 200 number remains the goal for this year as well.