Begaye and Nez meet with Navajo youth in Washington D.C. 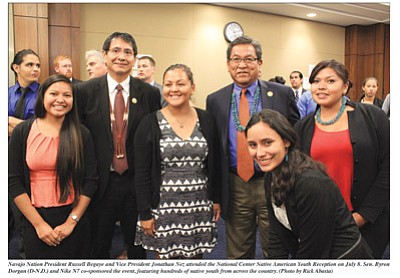 The efforts to inspire these Native youth were supported by the two top leaders from the Navajo Nation, especially with regard to Native language revitalization and preservation.

They met with Navajo youth and other youth ambassadors from across Indian country to encourage and support them during the youth summit.

On July 8, Begaye issued a proclamation in honor, recognition and celebration of Native youth. The Navajo Nation was the only tribe to issue a proclamation to acknowledge the youth in Washington, D.C.

"It is the hope of the Navajo Nation that these Native youth will use the skills and knowledge they attained in Washington, D.C. to improve the lives of their people in their communities," Begaye said. "These incredible Native American youth should be honored, celebrated and congratulated."

Nez was particularly proud of Native youth who fostered the effort to preserve tribal languages and speak their Native tongue, identifying this as an important aspect of their self-identity.

"Native American youth gathered here in Washington, D.C. stood up for preserving their language. We appreciate that," Nez said. "Diné bizaad is inherent within you. You just need to bring it out. We're proud of those Navajo youth who speak the language and we encourage all of our kids to learn."

In addition to the Generation Indigenous gathering, more than 60 Navajo youth were also in Washington, D.C. to attend the 2015 United National Indian Tribal Youth Conference.

For more than 37 years, UNITY has promoted the spiritual, mental, physical and social development of American Indian and Alaska Native youth to build a strong, unified and self-reliant Native America through greater youth involvement.

One group in attendance, chaperoned by Claudia Jackson, traveled from Dilkon, Arizona to represent the Navajo Nation at both conferences.

Jackson works for Dilkon Youth Services as a program and projects specialist, a position she has held since October 2014.

"The UNITY Conference is important to Navajo youth because it helps to foster their curiosity of the world and they build on their experiences when they travel to other places and meet new people," Jackson said.

She noted that DYS encourages Navajo youth to network and branch out to locally, regionally and nationally.

Jackson began working with Navajo youth in 2008, through the Leupp Family Farms initiative. At the time, she was the legislative district assistant to former 22nd Navajo Nation Council Delegate Elmer Begay.

Begay is the founder of DYS and is still involved with the program to help educate youth of the Dilkon community. The other primary supporter is the Holbrook Unified School District, in particular, the Indian Wells Elementary School.

The school district has been assisting DYS since its inception and helped develop an afterschool program. The program will again be in place in August, when school starts.

"This Navajo Nation Proclamation will make a difference, with the support of our Navajo leaders, President Begaye and Vice President Nez," Jackson said. "The biggest challenge facing our Navajo kids is providing services such as after school programs. We know the kids want to be involved, but transportation is one of the main challenges for our kids to participate in the activities that we provide."

"Let's nurture our young leaders of today with the knowledge we already possess and help them build a better Navajo Nation," Jackson said.

The youth ambassadors of Dilkon Chapter returned to the Navajo Nation on July 14.