Out and about: combining Houston Brothers Trail and Barbershop Trail double the outdoor fun 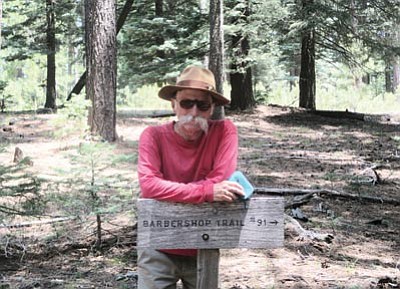 The author takes a break on the Barbership sign. Stan Bindell/NHO

Both trails begin on the Mogollon Rim and the best part about starting on the Houston Brothers Trail is the parking area has a magnificent overlook from the Mogollon Rim. These trails are also up at about 8,000 feet so the weather is perfectly cool for the summer.

The best advice for connecting the two trails is not to believe the forest service sign that tells hikers that the Barbershop Trail is 1.5 miles from the Houston Brothers Trailhead. It's actually more than two miles, but that's okay because this is a great two miles covered with flowers, butterflies and shade. There is also a fenced enclosure protecting a nice stand of aspens with a good amount of columbine flowers.

Soaking in the flowers and the fun is easy to do, but at some point it's onward to Barbershop Trail. If the barbers were there to cut the ferns, they didn't do their job. The Barbershop Trail is covered with ferns some growing more than six feet tall.

Maybe these plants think they are trees. Sunflowers were also in abundance and the orange butterflies were posing for photos.

Arizona Highways ranked the nine-mile trail as moderate, but there are some hills to cause huffing and puffing. We were able to stay on the trail for about three miles, but after that it was lost and we'll have to find the rest of the trail on another day.

The Barbershop Trail starts at about 7,600 feet and only goes up to 7,811 feet, but be prepared for the many ups and downs along the way.

One of the highlights of the trail is Dane Canyon where some entertaining boulders were found. But Dane Canyon was dry. It's easy to imagine that Dane Canyon would be picturesque with water.

According to Arizona Highways, Barbershop Trail was named for a sheepherder who cut people's hair as well the sheep's wool. It makes me wonder if my barber could cut sheep's wool.

The trail starts with shade provided by ponderosa pines. Aspens, oaks and maples are found later in the trail making this a beautiful hike in the fall when the leaves change colors. The ponderosa pines soon make way for the fern forest. Then the ponderosas pop up again to provide more shade.

About two miles into the hike, Dane Canyon appears. After that, hikers come down a slope and into a meadow. This is where one of the tricky spots to follow the trail occurs, but we were able to pick up this trail until it found its way to a road. That is where we started to follow a deer trail. Wrong. Maybe we should have just followed the road. That just means a return trip is needed to find the rest of the trail.