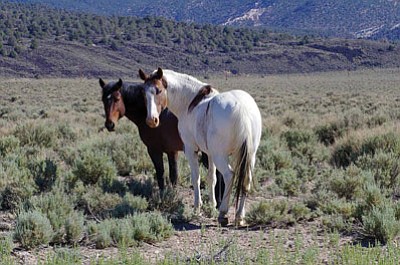 Wild horses, like these in Nevada, are protected by federal law. But the Forest Service says horses in Tonto National Forest enjoy no such protection and had proposed a roundup. Photo/Ed via flickr/Creative Commons

WASHINGTON - The U.S. Forest Service said Thursday it has put a planned roundup of up to 100 horses in the Tonto National Forest on hold until September, when Congress returns from recess.

Bosworth said the service would not take any action with the horses "before Congress went back into session in September," according to Carrie Templin, a spokeswoman for the forest.

The decision follows a public outcry - including concerns raised by nearly all of Arizona's congressional delegation - over the July 31 announcement that the Forest Service planned to round up "stray" horses in the national forest.

That announcement cited the Tonto horses as a "health and safety risk to the general public" as the reason for their removal, a process that could take many months.

But advocates said the horses pose no threat and they charged that the government has no right to remove the animals, which they said should be protected under the Wild Free-Roaming Horse and Burro Act.

The 1971 act established designated territories for more than 300 wild horse herds across the country, but it did not include the horses in the Tonto National Forest, said Ginger Kathrens, a wild horse advocate.

Kathrens, executive director of the Cloud Foundation, which protects wild horses and burros across the country, called the forest service proposal a "knee-jerk reaction" to a nonexistent problem.

"These horses have been roaming the area since long before the 1971 act, they should have been protected then," Kathrens said Thursday.

The Salt River Wild Horse Management Group has been fighting to protect Tonto forest horses for years. A statement posted to its Facebook page this week said not listing these horses as "wild" and protected under the 1971 act was illegal.

"The Forest Service violated a federal law by refusing to assign a Wild Horse Territory where they themselves have records of wild horses roaming as far back as 1930," that statement said.

But the service says it has the legal right to remove "stray livestock" like these horses, which would have been transferred to the Arizona Department of Agriculture if removed.

Agriculture department officials were not available to comment on the issue Thursday. But in a tweet of support this week, Gov. Doug Ducey promised the state would "protect" and "provide sanctuary" to the horses should they be removed and handed over to the Department of Agriculture.

But Kathrens fears for the future of the horses if the service follows through with its plan to remove what it calls "stray" animals.

"A possibility, if these horses are rounded up, is that they will be disposed of or slaughtered," she said.

Despite opponents claims that the horses do not pose a risk to the public, Templin said that in her year with the service she knows of "at least one incident where two horses were hit" and killed along Bush Highway in the southwest portion of the forest.

She said there is currently no historical data on incidents involving the public and horses, but that the service is in the process of compiling a list.

The issue brought about a wave of public opposition, pushing Arizona politicians to respond.

Arizona Republican Sens. John McCain and Jeff Flake wrote to the service Wednesday urging a delay in the roundup until it responded to a series of questions. They welcomed Thursday's decision as "a step in the right direction."