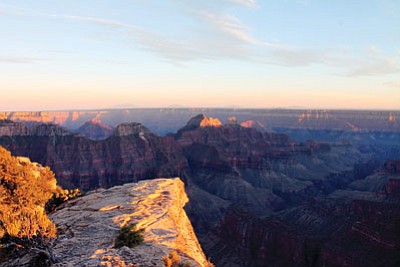 The sun sets over Bright Angel Point on the North Rim of the Grand Canyon. Loretta Yerian/NHO

GRAND CANYON, Ariz. - Grand Canyon National Park is putting on the 22nd annual Native American Heritage Days on the North Rim of the Park Aug. 6 and 7.

This event celebrates the rich cultural diversity of the Colorado Plateau and the Arizona Strip, highlighting Native American tribes with cultural ties to Grand Canyon.

The event will open Aug. 6 with demonstrations of Native American arts and crafts that will include silversmithing, pottery, basket weaving, painting, carving, flute making and preparation of traditional foods.

On Aug. 7, a special evening program takes place at 8 p.m. on native perspectives and the cultural significance of Grand Canyon.

Throughout the event tribal members and non-tribal members will offer special programs, activities and demonstrations on a variety of subjects, ranging from ethno-botany to Native American flute playing and dance. Visitors may inquire at the North and South Rim visitor centers for a complete list of event activities, as well as their times and locations.