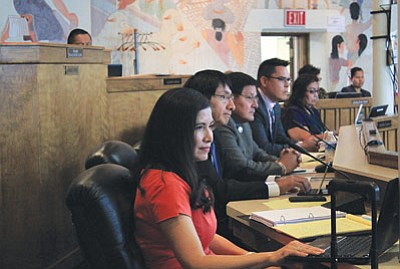 WINDOW ROCK, Ariz. - Navajo Nation President Russell Begaye and Vice President Jonathan Nez addressed the 2015 summer session of the 23rd Navajo Nation Council and gave an update on the state of the Nation since the administration took office in April.

Begaye said he and Nez were honored and privileged to join members in the council chamber.

"The summer rains have blessed our tribal lands and it is great to see the green vegetation across our Nation," he said. "It is a sign that our great Navajo Nation is blooming and our lands are thriving."

Begaye said in the two months since he and Nez took office, they are making significant strides tribally, regionally and nationally.

"There is definitely more to come and we have selected key individuals that will build upon the four pillars of our administration and make our vision a reality," Begaye said.

The administration selected Ethel Branch to serve as Navajo Nation attorney general. She is a graduate of Harvard Law School with both transactional and litigation experience. Branch obtained her master's degree in public policy and bachelor's degree from Harvard University.

Born in Tuba City, Branch grew up in Leupp, herding sheep and tending to cattle on her family's ranch. She is licensed to practice law on the Navajo Nation and in the states of Arizona, Oregon and Washington.

"[Branch] is a critical part of our administration," Begaye said.

The administration also selected Wenona Benally to serve as the executive director for the Office of the Navajo-Hopi Land Commission. She most recently served as the assistant attorney general for the Pascua Yaqui Tribe near Tucson, Arizona and previously worked for the Inter Tribal Council of Arizona.

Benally is from Kayenta. She earned her Juris Doctorate and master's degree

For executive director of the Division of Natural Resources, the administration selected Bidtah Becker. She previously served as the assistant attorney general for the Navajo Department of Justice, under the Natural Resources Unit.

Becker earned her Juris Doctorate at the University of New Mexico School of Law. She is also a graduate of Georgetown University's School of Foreign Service. In 2012, President Barack Obama appointed her as a trustee for the Institute of American Indian Arts. She was also appointed to the boards of Navajo Studies, Inc. and the Southwestern Association of Indian Arts.

For the Division of Social Services, Terrelene Massey was tapped to serve as executive director. Massey is from Pinon, Arizona and holds a Juris Doctorate and Certificate in Indian Law from the University of New Mexico School of Law. She earned her master's degree in public affairs from the University of Texas at Austin and her bachelor's of science in political science from Arizona State University.

Also selected was Jackson Brossy to serve as executive director of the Navajo Nation Washington Office. Brossy is a graduate of Stanford University, where he received his bachelor's degree in economics, statistics and public policy. He is pursuing a master's degree in public policy from the Harvard John F. Kennedy School of Government.

Brossy knows his way around Capitol Hill politics and has plenty of diplomatic connections from his previous work as a Native American policy advocate and senior associate with Upper Mowhawk, Inc. He also worked for the National Congress of American Indians in Washington, D.C.

For the Division of Public Safety, Jesse Delmar was selected to serve as executive director. Delmar is a graduate of Northern Arizona University with a bachelor's degree in criminal justice administration with a minor in psychology. He is also a graduate of the Federal Law Enforcement Academy and FBI National Academy.

Delmar most recently served multiple terms as chief of police for the Ft. McDowell Yavapai Nation. He served as an executive fellow with the FBI Executive Fellowship Program in Washington, D.C., as vice president of the International Association of Chiefs of Police Indian Section and as president of the Indian Country Intelligence of Arizona.

Benn is a scientist and most recently worked as research science consultant for Nihidah Nidii Dal, LLC in Lukachukai, from July 2010 to May 2015. In 2010, he successfully wrote and received the NASA-MIRS research grant for use at Navajo Technical University. He also worked as director of the Native American Research Laboratory at the University of Montana in Missoula.

M. Teresa Hopkins was selected as the executive director of the Navajo Telecommunications Regulatory Commission. She worked for more than eight years with the Navajo Nation Judicial Branch, but has a strong background in telecommunications and is also chief executive officer of her own business, Diné Digital Services, LLC.

"We are very confident she will bring these skills to the table for the Navajo Nation," Begaye said.

"Our administration is very proud and excited to bring these highly educated and experienced professionals back to the Navajo Nation and you should be, too," Begaye said. "They will assist us with restoring the confidence of the Navajo people back with the Office of the President and Vice President. The restoration of this trust also includes Capitol Hill, the Obama administration, tribal leaders, Standards and Poor and many others."

In addition to bringing back highly educated and experienced Navajo professionals, the administration also said it has resolved to work together with the legislative and judicial branches of government.

"Since our oath of office and inauguration two months ago, we have already met twice with our fellow Navajo leaders and agreed to nine priorities from the Nation," Begaye said.

"We will implement these priorities into the four pillars of our administration: Navajo Veterans, Elders and Youth, Infrastructure and Job Creation," Begaye said.

The administration met with Speaker LoRenzo Bates and acting Chief Justice Eleanor Shirley and said, moving forward, there should be one voice from the Navajo Nation on Capitol Hill and around the globe.

"The Nation has not had a consistent message from the tribal branches on specific priorities. That played to the advantage of other tribes across Indian Country lobbying against us," Begaye said. "It's very important that we do not lose sight of these priorities and the fact that the only way to achieve our goals is by working together, not against each other. We appointed highly competent individuals who have the dedication and experience to achieve our Nation's objectives."

Begaye said Navajo Nation leadership will meet quarterly to ensure the lines of communication remain open between the branches and to provide updates on their progress.

He also said the tribal government has the opportunity to re-evaluate the way its divisions, departments and programs do business.

"We must embrace the opportunity and ensure our tribal operations maximize efficiency at all levels," Begaye said. "We must downsize the central government and give it back to the Navajo people."

Begaye said that the administration would soon share their recommendations on how to utilize the Sihasin Fund to the benefit of the Navajo Nation.

"We must exercise fiduciary responsibility and consider how we could utilize the funds to elevate the Nation to the coveted AAA rating," Begaye said. "By doing so, we would return a lot of confidence back into the Nation by the financial institutions, banks, S&P and others because they would know that we are set to pay our debts. In turn, that would open the door for future bond opportunities to build our infrastructure needs."

The administration is creating a position within its office to specifically track all external funds coming into the Nation. This individual will track the timeline of when funds are received, what reports are needed, deadline dates, project management needs and will work closely with the grantees.

"She is already working on behalf of our veterans," Begaye said.

He said all of the appointments and ideas were just a broad overview of the plans for the future.

"In order for these goals and objectives to be achieved, we must be committed to working together," Begaye said. "The Navajo people elected us to work on their behalf and that is where we must remain steadfast in our actions, especially when funding is involved."

One key to that, Begaye noted, is not exceeding the Undesignated, Unreserved Fund Balance. He said the Nation must be strategic on how it spends the Navajo people's money explaining that, in the past, riders were used for supplemental appropriation requests, a popular move that caused overspending.

"We do not want to go down that road again," he said. "Please be diligent and work with our office to ensure our Nation does not fall into deficit. All supplemental appropriation requests should be in the form of stand-alone legislation and go through the required five-day comment period to ensure the Navajo people have their input on the funding request."

Begaye said that during Navajo Nation leadership meetings, it was agreed that all divisions would work together and keep open channels of communication between the branches of the government.

"Let us remain committed to this," he said. "We recently were notified of legislation that was introduced to create a police commission. The fact that we were never invited to the table to sit down and talk about this legislation affecting one of our divisions was disheartening. Instead, we heard about the initiative when the bill was introduced."

Begaye said that was not an example of working together and encouraged the members of the Council and the judicial branch to remain committed to working together for the benefit of the Navajo people.

"If we are to have a united voice on Capitol Hill and upon the global stage, it must first begin here, at home," Begaye said. "Thank you for the opportunity to report to you on the Navajo Nation executive branch. The state of the Navajo Nation is strong and we are working together to fortify that strength even further, onto the steps of Capitol Hill and the rest of Indian Country. Ahe'hee and God bless."