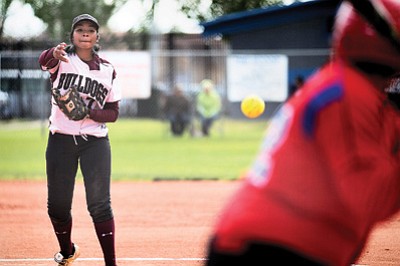 Winslow went on to beat the Holbrook Lady Roadrunners 11-4 April 24 also in Winslow. The victories improved Winslow's record to 22-6 with only a game against the Snowflake Lady Lobos left in the regular season April 29.

The Lady Bulldogs should have a favorable seeding in the state tournament.

In the Show Low game the Lady Bulldogs came from behind, trailing 6-0 going into the bottom of the third inning.

The Lady Bulldogs scored a run in the bottom of the third and two in each of the next three innings while holding Show Low scoreless and picking up the victory.

Richelyn Villanueva got the win working all seven innings and giving up six runs on 11 hits. She was hurt by six errors that led to unearned runs. She walked two and struck out five.

Alicia O'Haco led the Lady Bulldogs at the plate with two hits in four trips to the plate and had two RBIs. Hailie Branson, Taylor Holeva, Alyssa Smith and Villanueva were one for three with Branson hitting a triple and an RBI, Villanueva hitting two RBIs, and Holeva one RBI. Elizabeth Lozano was one for four.

Cheyanne Benally got the win against Holbrook working four innings and giving up four runs, only two of which were earned, on seven hits and two walks. S. Beatty relieved and worked three scoreless innings giving up only two walks.