One door shuts, another door opens
Jonah Littlesunday disappointed with America's Got Talent 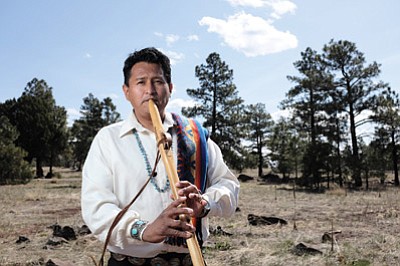 FLAGSTAFF, Ariz. - After auditioning for America's Got Talent, a national television show, Jonah Littlesunday is struggling emotionally and financially.

But he is still feeling the outpouring of support from his local Flagstaff community, Native and otherwise.

"It's more like my people kind of came up and just lifted me up," Littlesunday said.

Littlesunday is still close to losing his house and, weeks after his try out for the show, he has yet to receive official word that he is not on the show, although he believes that is the case.

In fact, Littlesunday said even if he did receive a call at this point, he would likely decline the invitation because of the way he feels the producers have treated him and other contestants who tried out for the show.

"My reasons would be because we, Native people, have something called dignity," he said. "We don't grovel or like our honor toyed with. This is what my message would be to the America's Got Talent producers."

He said that he saw a Native Hawaiian family, a father and two daughters, who were extremely talented and have tried out for the show four times but have never been selected because they could not get past the producers.

Littlesunday said he believes the publicity surrounding his audition and possibly being the only traditional Native artist the show has ever featured means he feels he has let people down. He had dreams of not making it but he didn't want those dreams to come true. But they have.

"I've had my sad moments," Littlesunday said. "But I'm moving on."

But those are not the least of his worries. He is a couple of weeks from losing his house.

"It is very stressful," Littlesunday said. "You have a home, you have a place and you're just going to lose it."

He has started a GoFundMe campaign at Save My Home - Jonah Littlesunday.

He thought when the publicity surrounding his tryout died down that he would return to his normal life, working and trying to make ends meet. But making ends meet also meant he had to sell two of his flutes.

During the Northern Arizona University powwow, Rick Yazzie and his family gave him a beautiful flute, in addition to food and gifts.

Littlesunday had mentioned to Yazzie that he was a huge fan of Robert Tree Cody. Yazzie and his family made it possible for Littlesunday to not only meet Cody but to play with Cody on stage at the powwow. He also met Jay Begaye, a traditional singer.

"It was awesome, I was so star struck," Littlesunday said. "Everything was so surreal, it was like a dream. I was emotional. People were coming up to me and shaking my hand and just trying to lift me up."

That lesson has helped him take advantage of the other opportunities coming his way.

"I'm taking on a whole new road and it's like a journey I never expected," Littlsunday said.

The invitation to the Arizona State Univeristy powwow brought him another gift. Cousins he has not seen in almost 20 years, Billson Littlesunday and Will Littlesunday gave him another flute. The powwow also brought him to the attention of Canyon Records, from Phoenix, Arizona.

Canyon Records specializes in Native American music and is one of the oldest independent record labels in the music industry as well as one of the oldest cultural institutions in the state of Arizona, according to its website. Cody and Begaye record for Canyon Records. He saw Kevin Yazzie, who sings with the Native American Church and another one of Littlesunday's idols at the ASU powwow.

"There's a whole huge world in Native American powwow systems and cultural events - Gathering of Nations and the Crow Fair," Littlesunday said. "I believe the talent is something no one really sees if you're only around it. It's a huge market [of really talented people]. It's a world of its own."

Canyon Records invited Littlesunday to a demo session to get him familiar with the studio and recording process. Mostly, Littlesunday plays at funerals, weddings, school gatherings, entertaining elders and the homeless. Coconino Center for the Arts asked him to perform with his own ensemble. Amigo Kandu, a non-profit filmmaker, was at the powwow recording Littlesunday and helped him with his Facebook page.

"He's an amazing guy who has jumped behind me and tried to support me," Littlesunday said. "I really thought things were over. I really did. To have people say 'come here and play, come here and do this,' it means a lot."

Out of all those, recording for Canyon Records is at the top of his list.

"I literally want to," he said. "Following in Robert Tree Cody's footsteps. I've been a fan of his since before I started playing flute. I'm just at a loss for words. I can't believe it. I cried."

Littlesunday said while he is heartbroken about the show, he wishes everyone he met in Los Angeles the best. He said they were amazing people following their dreams, like he was, even if the dream was more fantasy than reality.

"I guess I was really hoping for a miracle with America's Got Talent," he said.