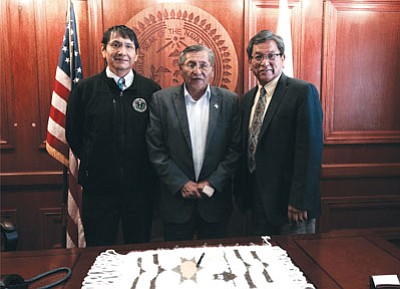 Unofficial results showed that of the 130,000 registered voters, a little more than 37 percent voted in the election. Begaye received 25,745 votes or 62.51 percent of the vote while Shirley received 15,439 or 37.49 percent of the vote. The western agency voted overwhelmingly for the Begaye/Nez administration, though voter participation was still only about 33 percent.

Navajo Nation President Ben Shelly met with the newly elected president and vice president April 23 as they announced plans for the official transition to take place at noon on May 12.

Shelly congratulated Begaye and Nez on their victory and talked to them about the transfer of power to the new administration.

"Congratulations to the Begaye-Nez team for a decisive win," Shelly said. "We are working together and are thankful for the patience of the Navajo people. Never forget that it is the Navajo people who are the governing body of this great Nation."

The transition team will work together on tribal government divisions, budgets, economic development projects and updates on county, state and federal agencies. Initiatives from the White House and United Nations will also be included.

The election season was fraught with challenges - Chris Deschene was disqualified after he came in second in the primary because of challenges to his ability to speak Navajo fluently, which created debate about whether the election should move forward or whether the fluency requirements should be changed before the election took place.

Two former presidential candidates, Dale E. Tsosie and Hank Whitethorne, originally challenged Deschene's candidacy on the basis of whether he was fluent in Navajo. They also filed motions with the Navajo Nation Supreme Court in January to overturn a Dec. 30 Navajo Nation Council resolution that called for a new primary and general election and another resolution that pardoned the Navajo Nation Board of Election Supervisors, after the court held them in contempt for failing to comply with the court's order to remove Deschene from the ballot.

Shirley's campaign said that the recount was to make sure "we come away from this recent special presidential election with the concrete knowledge that the integrity of the Navajo election process is intact."

The recount did not show any discrepancies that would have changed the final result of the election, according to news reports.

In a recent interview with the Navajo Hopi Observer, Begaye said he believes the biggest issues facing the Navajo Nation are unemployment and creating jobs on the Nation.