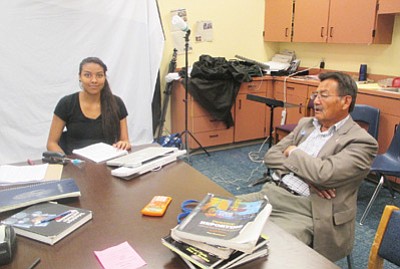 POLACCA, Ariz. - Jesse Thompson has served on the Navajo County Board of Supervisors for 22 years and has been pushing to get Low Mountain Road paved for about that long.

Thompson, who is Navajo, is convinced the paving of the road is closer to reality, but it will still take a couple of years. Low Mountain Road is a 14 mile stretch from Polacca to Low Mountain that is impassible in most vehicles when the weather is bad.

"In heavy rains, you can't use it. It gets flooded," he said.

Thompson spoke to Hopi High media students April 7 about Low Mountain Road, the importance of voting and other issues.  Thompson estimates that paving the road will cost about $35 million. About 20 years ago, it would have cost $20 million, but the cost keeps going up with a rise in material and inflation costs.

Thompson said the bulk of the funding would come from the federal government through a grant, but supporters would include the state government, the county government and the Hopi Tribe.

"We'll work closely with federal, state and tribal officials," he said. "We'll support what the tribal leaders want. It will work better if people are united on this project."

Archeological and environmental assessments have been performed on the road as well as engineering designs.

"We're prepared and ready to look for funds," he said.

Thompson said the timeline for starting the road paving depends on where government officials place it on their priority lists for federal, tribal and state roads.

"Our priority concern is the safety of the students  who come from quite a distance," he said about students who ride buses on Low Mountain Road to get to Hopi Jr./Sr. High School or other schools. "But we also have a concern for first responders when law enforcement or the fire department needs to use the road."

Thompson recounted how officials worked together several years ago when a bridge by Hopi High School was deficient and caused some flooding. He said the Bureau of Indian Affairs, Navajo County, Hopi Tribe and Arizona Department of Transportation worked together to fix the bridge.

He said Navajo County donated some road repair equipment to the Hopi Tribe to help with road repairs.

"It has to be done through either an Intergovernmental Agreement (IGA) or Memo of Understanding (MOU). We recognize the sovereignty of the Hopi Tribe and any tribe," he said.

Voting can make a difference

Regarding the importance of voting, Thompson told the students that they are coming into an age where they need to think about what is good for the students and for the people in this area.

"The best way to have a voice is to participate in the voting process," he said. "Elected officials are there to help the community."

Thompson said elected officials can help residents with everything from healthcare to law enforcement.

"People are looking at your potential. Establish a career. You may be a leader to work with the public. You must protect values and growth in the community," he said.

Thompson urged the students to vote as soon as they turn 18. He said the Navajo County Attorney is outspoken against substance abuse.

"We want to tell you to stay away from substance abuse. It can keep you from getting jobs. Keep your record in good shape," he said.

Another project in the works is bringing a baseball field to Spider Mound, a recently established community located east of Keams Canyon. Thompson is working with the Arizona Diamondbacks with the hopes of funding the baseball field.

The Navajo County Board of Supervisors has five members including three Native Americans, but it wasn't always that way. For many years, there were only three people on the board and only one was Native American.

There are approximately 103,000 people in Navajo County with about one-fifth located in each of the five county districts.

Thompson's district includes Winslow, Hard Rock and all of the Hopi Reservation.

"Each community has different projects going on," he said.

Thompson urged the students to get a good education, but he also told them to not forget their language or their way of life.

"Who you are will help guide your way," he said.

Thompson said if students set themselves on a routine then they will get their work done.