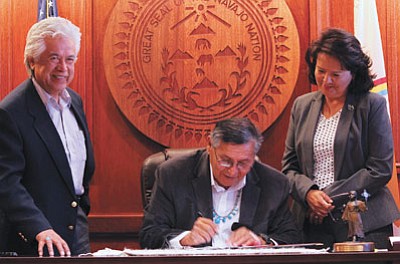 WINDOW ROCK, Ariz.-On April 14, Navajo Nation President Ben Shelly executed final approval of a cooperative agreement for the Land Buy-Back Program for Indian Nations during a signing ceremony at the Office of the President and Vice President.

Joining him were Sharon Pinto, director of the Navajo Region of the Bureau of Indian Affairs, and Larry Rogers, chairman of the Eastern Navajo Land Commission.

"We are here for final approval of the cooperative agreement with the federal government for the Land Buy-Back Program for the Navajo Nation," Shelly said. "The U.S. Department of Interior is encouraging tribal nations to implement the land consolidation provisions of the Cobell settlement. There is $1.9 billion available for the Trust Land Consolidation Fund to purchase fractional land interests across the Navajo Nation."

The headquarters for the Navajo Nation Land Buy-Back Program is in Crownpoint and satellite offices are located in Farmington, Gallup and Winslow, Arizona.

"Today's signing ceremony is the result of planning and coordination with the Navajo Nation and Department of Interior since 2013," Shelly said.

He said swift action to implement the program was necessary because state and private interests are attempting to allow federal land studies. Those studies would undoubtedly focus on allotted lands for privatization to create taxes and other purposes, he said.

"Their interests are to privatize (allotment) lands for taxes and other purposes. We cannot let this happen. By signing this agreement into law today, I am ensuring we address these allotment lands before private interests do," Shelly said.

Pinto said the BIA and Interior Department are excited the Navajo Nation has taken a strong interest in the program.

"We're excited we'll continue to provide the support that the Nation needs moving forward, as far as infrastructure, office facilities and anything else the Nation needs to implement the program," Pinto said.

She noted the program is on a fast track, with a one-year period. With the agreement signed, the next step is to hire new staff and implement the program.

"Appraisals will be issued sometime in November 2015 for the various tracts of various areas. Thank you, Mr. President," Pinto said.

Rogers said the ENLC has worked cooperatively with the Navajo Nation over the past year to prepare plans for the new program.

"We need to educate the landowners. They need to be well informed on the options they have. In the very end, it's up to them," Rogers said.

He said one of the main tasks of the ENLC is to regain lands in the eastern agency to minimize the checkerboard effect by transforming more lands to tribal trust for Navajo communities to use.

"In the end, land consolidation is very important. We appreciate your help," Rogers said.