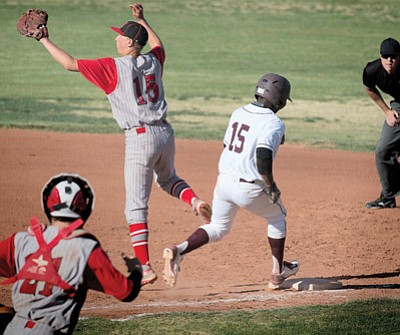 Darrien Brown beats a throw to first base during the Winslow Bulldogs March 31 20-1 loss to Mingus. Photo/Todd Roth

WINSLOW, Ariz. - The Winslow Bulldogs baseball team ended a four-game losing streak with wins over the Globe Tigers 17-1 in Globe April 4 and the Payson Longhorns 13-12 in Winslow April 7.

The two wins improved the team's record to 8-8-1 for the season. The Bulldogs were to play in the Estrella Foothills Wolves Classis on April 9.

In the win over Globe, Matt Ramos got the victory working the entire five inning game and allowing just one run which was unearned on two hits, one walk and a hit batter. He fanned six. He also led the Bulldogs at the plate with a four for four day.