Hopi Jr./Sr. High students hear about dangers of drug and alcohol use 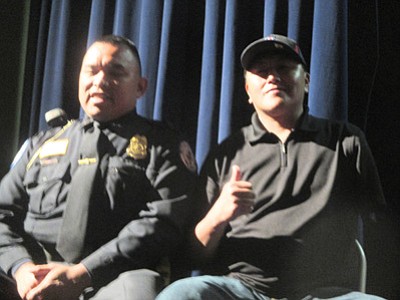 POLACCA, Ariz. - Hopi officials spoke to students at Hopi Jr./Sr. High School about drug and alcohol problems that are both national and local issues.

The comments came during a drug and alcohol prevention assembly April 8 in the auditorium.

Carrie Onsae, public health educator at Hopi Health Care Center, told the students that this wasn't a lecture, but an opportunity to hear from people who support them. She said alcoholism is a national problem with 14 percent of teens intoxicated at least once a month.

Shawn Namoki Sr., who works for the Hopi Substance Abuse Prevention Center, told the students that he is a recovering drug addict and alcoholic. He recounted how he was arrested for using marijuana when he was 13 years old.

"I had a life. I had a lot of opportunities, but I lost those choices," he said.

Namoki excelled in sports as a cross country runner his freshman year in high school, but by his sophomore year he stopped because of drugs and alcohol. During one cross country race, he drank whiskey before the race.

"I was naive. I didn't think I had to practice or train," he continued. "I was being stupid. I wasn't respecting myself, the team, my coach or the school."

Namoki lost his right arm in a drunk driving incident.

"I was young and dumb. I had a supportive family, but I used marijuana and smoked crack. Marijuana is the base drug of all addictions," he said. "Hopefully my experience is enough to change one of you."

Namoki has spent most of his adult life on probation. He remembers sitting in the Coconino County Jail with murderers and rapists. One of his cellmates told him that 85-95 percent of the cellmates would go to prison. Namoki felt lucky when he got off with probation.

He said when he was a student at Hopi High School no one shared the message with him that he was now sharing with the students. So, he wants to make the most of his opportunities. He is serving as the vice chairman of the Miss Hopi Committee as part of his commitment to get back in touch with his community. He also lost touch with his culture so he now drums and sings in pow wows.

"I'm here for prevention," he said. "When I take drunk drivers off the roads, it's like I saved someone's life."

Begay told the students that his father was an alcoholic so he decided not to be like that. He soon joined the Winslow Police Department where he witnessed heartbreaking cases dealing with alcoholism.

One case involved an alcoholic whose son told him "I wish you would die because you're a disgrace."

That broke the man's heart. One snowy night, the man committed suicide by jumping in front of a train.

"I picked up his body parts - his arms, his legs, his eyes. It's an image that will never be gone. I could smell the alcohol on every body part. After seeing that, I was determined to talk about alcohol," he said. "I had to tell his family what happened. That son will always remember that. I see those stats every day and it breaks my heart."

Begay said Namoki made a mistake, but is working on correcting it.

"I don't want him or you to be that guy," he said. "Bootleggers and drug dealers don't care about you. They wear the same clothes, drive the same car and don't progress. The things I say is to help you out."

Begay said Hopi High School has a cross country dynasty and a culture that makes them proud.

"You all have a purpose," he said.

Onsae said it's hard enough to balance walking in the Native American and Western worlds without adding substance abuse to the equation.

"You have young people in your family who may be looking up to you, so do you want to mimic good or bad behaviour? We have these programs because we want you to succeed," she said.