Enhancing the clouds: A solution to Arizona's water challenges? 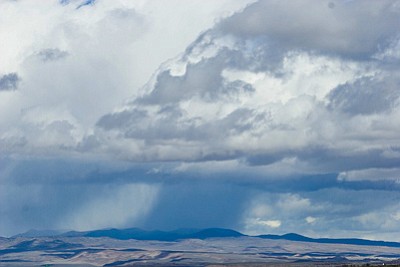 A cumulonimbus cloud produces a shaft of rain. Some say Arizona can help address its water challenges by seeding clouds to produce more rain and snow. Photo/University Corporation for Atmospheric Research

PHOENIX - Of all the potential solutions offered for Arizona's water challenges, one has a decidedly science fiction feel: planes flying over the Rockies, seeding clouds with aerosolized silver iodide to stimulate rain and snow.

It's not magic or raindancing but a very real process that dates back to the 1940s.

"It hasn't been taken off the table as a potential tool as we work our way through drought now and in the future," said Nancy Selover, Arizona's state climatologist.

Cloud seeding has a history in the state, with organizations like the Central Arizona Project and the Salt River Project (SRP) investing in research. While SRP hasn't looked into it since the 1960s, the CAP has put about $1 million toward research happening in other states since 2007 in hopes of increasing the supply in the Colorado River system.

"Part of the reason we fund cloud seeding in the upper Colorado River Basin, specifically the states of Wyoming, Colorado and Utah, is because water that is generated in those states is primarily where most of the flow in the river is generated," said Mohammed Mahmoud, planning analyst with the CAP. "So the reason why we fund those projects is to augment the water that could come out of the upper basin."

Rhett Larson, a research fellow with the Kyl Center for Water Policy at Arizona State University's Morrison Institute for Public Policy, said that although the process can help, there are other considerations, such as silver accumulating in river basins and figuring out who is entitled to the extra water.

"There are potential environmental impacts, and also political and legal uncertainties," Larson said.

James Walter, SRP's senior meteorologist, said cloud seeding works by adding ice nuclei, or the initial seed of a rain drop or snowflake, into a cloud that has extra moisture. That's typically done with silver iodide in an aerosol form.

"Typically the seeding of the clouds are done by ground-based generators, propane burners that burn (silver iodide) to aerosolize it, and aircraft seeding, flares attached to the wings," Walter said.

Even fog can be seeded to shed moisture and increase visibility around airfields, he said.

Selover, the state climatologist, said that the most difficult aspect of cloud seeding is measuring whether an area actually got more rainfall.

"So the effectiveness of it is in doubt," she said. "It's not that it's completely ineffective - they're pretty sure it has some impact - but it's pretty hard to measure."

But Walter and Mahmoud pointed a recent Wyoming Weather Modification pilot project, which suggested an increase of seasonal snow water accumulations of 5 to 15 percent and a 1.8 percent increase in streamflows.

"Percentage-wise, that might seem modest, but for the investment you put in that's actually pretty good," Mahmoud said.

Mahmoud said that compared to other alternatives for water augmentation, like desalinating seawater, cloud seeding is the cheapest option, though it isn't going to be a drought-buster on its own.

"It's a simple way to try to have a new supply in our efforts to mitigate potential shortage on the Colorado River that could happen as early as 2016 or 2017," he said.

Larson, with the Kyl Center, said that often people are concerned with silver accumulating in river basins and being taken up by plants or fish.

"Right now it looks like that's not what's happening, but cloud seeding is such a new technology and has really only been done on such a small scale and I don't think we have a really good grasp on the environmental impacts," he said.

Mahmoud said a common concern is that seeding a cloud could mean robbing another region of that precipitation. But he said the process simply enhances the cloud's ability to precipitate.

"It's not causing it to move a certain amount of water from region to another," he said. "By cloud seeding, you're just enhancing the volume. You're enhancing what the cloud was about to do in the first place."

But Selover, the state climatologist, said that if cloud seeding is conducted in Colorado, for example, then the clouds move and could potentially drop their rain over, say, western Kansas.

"That may or may not be desirable for the people in western Kansas," Selover said. "The agricultural people may have just irrigated and all of a sudden they get this huge rainstorm. Then the question is, 'Would we have had that much rain if Colorado hadn't done cloud seeding?'"

Larson said that though the science is backed up with positive outcomes, there are a lot of challenges with introducing a technology like cloud seeding into a river basin, including the inevitable disputes about who is entitled to the water.

"Even though it sounds like magic, it's not magic," Larson said. "In order for cloud seeding to work for us, we need it to be successful in upper basin states, which means we need new laws and new political instruments."