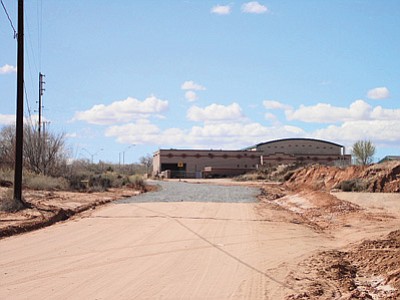 To’Nanees’Dizi Chapter in Tuba City recently made a donation of road gravel to the Tuba City Unified School District to help smooth out two bus routes, including this one near the back of the cafeteria building at Tuba City Junior High. The other route that received some much needed gravel is the old Airport Road in west Tuba City. Photo/Rosanda Suetopka

Gravel was delivered to both the dirt road area near the Tuba City Junior High and the back of Tuba City hospital housing as well as the dirt bus route near the old Airport Road in west Tuba City.

Both of these dirt roads get heavy traffic. During the winter months the roads get especially muddy making student pick up messy and, at times, almost impossible for the buses to get in and out of heavy snow or mud without delaying student arrival to school. The road conditions also create expensive maintenance costs for the school buses themselves.

The Tuba City District Transportation Department was very happy to get the gravel donation. Officials said it makes daily travel to the seven district schools that much smoother and safer for their student passengers.

Wet weather wreaks havoc on Rez bus routes
Letter: Let's all work together to clean up To'Nanees'Dizi Chapter
Quick Reads: week of May 25
A portion of Tuba City's “Pothole Alley” repaired
Potholes can be a bump in the road to education on the Rez
Event Calendar