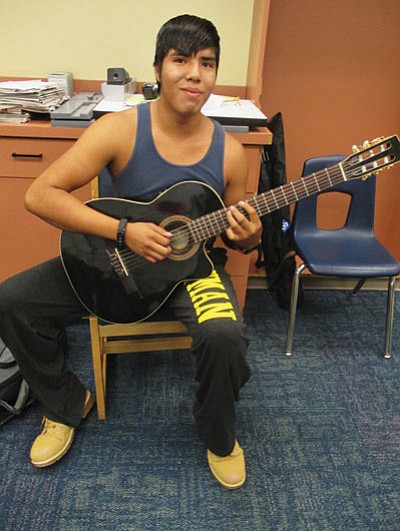 POLACCA, Ariz. - Star Not Afraid wants to become a music teacher and composer. Although he's just a senior at Hopi High School he's partially on his way.

Music teacher Jared Robertson left after last school year and the school hasn't found a replacement yet. So, Not Afraid started a music club. He said the high school musicians were too good to stop playing.

Music club members weren't sure what they were going to do for their first project when they learned that the One Song Project selected Hopi High School as the host American school for their project. The One Song Project is an international effort for peace through song with major efforts in eight countries. (See full story in next week's Observer.)

The music club is working on the One Song song and other songs for a performance planned for Oct. 23 at Hopi High School.

"I started the club for my own benefit as well as other students," Not Afraid said. "We had no music teacher so I decided to be the teacher. I see the potential."

Not Afraid is president of the music club. The other officers are Vice President Raquel Manuelito, Treasurer Hawthorne Dukepoo and Secretary Mikadio Navasie. Daniel Lim is not an officer, but Not Afraid said the officers and Lim are the club leaders. The faculty advisor is Maggie Laughlin.

"Our goal is to have four performances throughout the school year," Not Afraid said.

Not Afraid praised Hopi High Principal Charles Gover for allowing the students into the band room and allowing them to use the school instruments twice a week when the club meets after school during tutoring.

"Principal Gover thought it was a good idea and he was as eager I was to get the music club going. I appreciate that he made sure that we had everything we needed," he said.

Not Afraid said Hopi High is breaking new ground because he's not aware of other high schools that don't have a music teacher, but have a music club. He said there is no money involved and it is time consuming. He said that he and Laughlin are responsible for the instruments that the students use.

Not Afraid said before the school year is over he would like the music club to perform for the area elementary schools.

"The younger kids need to see that there's more than just watching TV or playing video games," he said. "This is a hands-on skill that they can use."

Not Afraid said his mother is excited about the program and how far her son is taking his music.

"I'm the last of Tom Irwin's students. He made me the musician I am today," Not Afraid said about the music teacher who got him started about six years ago."

Not Afraid has won music awards every year for the past six years. He is proudest of two awards. One is the Claudio Sanchez award he won at a competition in Snowflake. Sanchez performs with Coheed and Cambria, a heavy metal rock band. His other most prized award was winning the title of Top High School Guitarist in New Mexico in 2012 when he performed there.

"I grew up on rock and roll, heavy metal and punk rock, but I've also come to like flamenco, classical ensembles and the blues. I just like to jam," he said.

Not Afraid said the music club is important to him because he dreams of becoming a professional musician, and he feels he is constantly improving. He plans to major in music at Utah State on the eastern Blanding campus.

Manuelito, vice president of the music club, said this club is different than others because "we're all friends trying to make music." She said it's a cool experience because they can collaborate with other student musicians. She said most were friends who didn't know that they each played music.

Manuelito is one of the few members in the music club who doesn't play an instrument. She just sings. Her vocal influences are Shania Twain and Michael Jackson. But that's only part of the story. She transferred to Hopi High School from Sunnyslope High School in Phoenix where she was learning to play the cello only to find out that Hopi High School didn't have a cello.

For now, Manuelito is looking forward to the One Song Project.

"I don't know much about it, but it's nice that they came to us and acknowledged us," she said.

Manuelito said she also likes the music club because the students talk to each other.

"I thought everybody was going to be shy, but it hasn't worked out that way," she said.

Manuelito praises Not Afraid for not only starting the club, but serving as the teacher.

"Star is a really good teacher because he listens. He doesn't just hand you the notes and asks you to play. He's very patient," she said.

Manuelito has one other issue: stage fright. But she is committed to working through that so she can perform with the other members of the music club.