Court: Mine can give job preference to Navajo workers on Navajo land 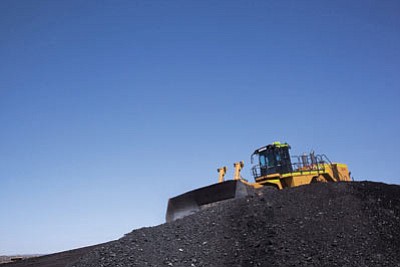 A bulldozer crawls over a pile of coal at Peabody’s Kayenta mine on the Navajo Nation in this 2012 photo. Photo/Peabody Energy

WASHINGTON - A federal appeals court ruled Friday that Peabody Western Coal Co. can give preference to Navajo tribal members when making hiring decisions for mines on the Navajo Nation.

The ruling by a three-judge panel of the 9th U.S. Circuit Court of Appeals rejected an Equal Employment Opportunity Commission assertion the preferential hiring violates parts of the Civil Rights Act of 1964 that prohibit discrimination based on "national origin."

The court disagreed, saying the preference - which is required as part of the coal-mining leases Peabody has with the tribe - is based on political classification and is designed to protect members of the tribe on whose land the mining occurs.

"Measures intended to preserve for the Nation and its members the fruits of the resources found on the tribe's own land are 'rationally designed' to fulfill the federal government's trust obligations to the tribe," Judge William Fletcher wrote in the opinion.

Lawyers for the EEOC were still reviewing the decision Friday and could not immediately comment on its merits, a spokeswoman said.

"We are disappointed by the ruling, and are considering next steps," Christine Nazer said.

A spokeswoman for Peabody Energy said the company was pleased with the decision.

"The 9th Circuit Court of Appeals has affirmed the legitimacy of hiring practices at the Kayenta Mine in Arizona," Charlene Murdock, the spokeswoman, said in an emailed statement.

Friday's ruling is the latest decision in a case that began in 1998, when two members of the Hopi tribe and one member of the Otoe tribe were turned down by Peabody for jobs for which they said they were qualified.

They filed discrimination charges with the EEOC, saying they were passed over because they were not Navajo, according to court documents.

Under leases with the Navajo and the Department of the Interior that let it mine coal on Navajo lands, Peabody is required to give preferential treatment to qualified Navajo applicants when hiring workers. The policy dates to the 1940s, when the federal government began including such tribal hiring preferences in leases.

But the EEOC said Peabody's hiring practice actually discriminates against prospective employees based on their national origin, violating protections under Title VII of the Civil Rights Act.

After an investigation, the commission sued Peabody in an Arizona federal district court in 2001.

But the district court rejected the EEOC's national origin discrimination claim, holding that Peabody's Navajo hiring preference is a political classification based on an applicant's affiliation with a tribe.

"Congress was plainly aware that Title VII could have ramifications for Indian communities, and it saw clearly the need to mitigate those possible effects," the appellate court's ruling said.

Navajo tribal officials did not immediately respond to calls requesting a comment on the court's ruling.

A spokeswoman for the Interior Department - a co-defendant in the case because it approves such leases as part of its statutory authority - said in an email that the department cannot comment on pending litigation.