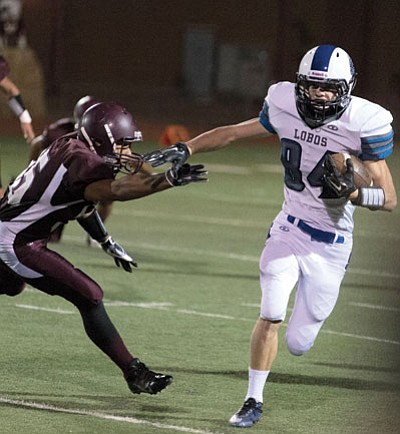 WINSLOW, Ariz. - The Snowflake Lobos defeated the Winslow Bulldogs 38-8 in Winslow Sept. 19. The loss left Winslow with a 2-2 record and Snowflake improved its record to 3-1 for the season.

The Lobos dominated the Bulldogs, putting together 200 yards of offense in the first half while holding Winslow to barely positive yardage. A number of Snowflake players were outstanding including Drew Schneider, Alex Solomon, Porter Black and Tyler Claridge. Winslow's Akkeem Foster had an outstanding night on defense and kicked some long punts.

The Lobos drove 71 yards in their opening possession and scored on a 15-yard pass from Claridge to Lane Penrod. Porter Ballard ran for a two-point conversion and an 8-0 lead with 7:35 left in the first quarter.

The Lobos got into scoring position on a 35-yard punt return on which a Bulldog player was seriously injured. The game was delayed for approximately 15 minutes while he was attended to and an ambulance was called to take him to the hospital. The Winslow defense held and Snowflake settled for a 35-yard field goal by Brenton Ballard for an 11-0 lead with 2:59 left in the first quarter.

The Lobos scored on a nine-yard run by Schneider with 8:57 left in the first half. The conversion kick failed and Snowflake led 17-0. The key play in the scoring drive was a completed pass on fourth and 14 inside the Winslow 10-yard line.

Snowflake drove 67 yards, mostly on a 50-yard run by Schneider, and scored on a four yard run by Black. The conversion increased the lead to 24-0 with 5:15 left in the half.

Schneider continued his outstanding work with a 59-yard run for a touchdown on Snowflake's next possession. The conversion gave the Lobos a 31-0 lead with 2:58 left in the half.

The third period was scoreless until the Lobos scored on a two-yard run by Zach Solomon with less than two minutes left in the period. The conversion increased the lead to 38-0.

Winslow got on the scoreboard on an eight-yard pass from Tres Cake to C. J. Chacon with 4:11 left in the game. A two-point conversion pass from Cake to Darrien "Peanut" Brown cut the Snowflake lead to 38-8. The score was set up by a pass interception by Avery Smith at the Lobos 12 yard line. The score was important for the Bulldogs in a game in which they were smaller and playing one of the best teams in the state.

Winslow will play host to a tough Estrella Foothills Wolves team on Friday. The Wolves eliminated the Bulldogs from the playoffs last year and are 2-2 this year. They lost their opener to a very good Seton Catholic Sentinels team 35-24 and lost their second game to Snowflake 28-21. The Wolves clobbered Coronado 64-14 in their third game and thumped a highly regarded Fountain Hills Falcons team 42-7 Sept. 19.

Snowflake will play host to the Monument Valley Mustangs on Friday. The Lobos will play Blue Ridge in two weeks. The Yellowjackets were 1-3 going into last Friday's game against the Alchesay Falcons.