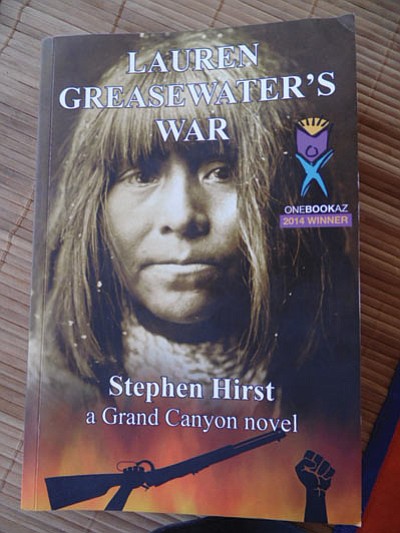 HOPI - Set in the 1970s when Native American groups like the American Indian Movement made headlines around issues like U.S. government interference with Indian land trusts, native language preservation and other cultural insensitivities, the latest book by Flagstaff author Stephen Hirst, "Lauren Greasewater's War" sets a dramatic scene for a young Havasupai woman.

The main character is a young Havasupai woman musician named "Lauren Gwi' Swaada" (Greasewater) adopted as an infant then taken away to New York to be raised by a middle class Anglo family. She eventually makes her way back to her homeland in Arizona to the Havasupai Reservation.

Lauren stumbles into a personal war with the U.S. government over her family's ancestral plot of tribal land including a traditional Havasupai house which she comes to find during her reawakening with her tribe.

Lauren sets out on a spiritual and tribal cultural journey into her past but also ends up battling the Park Service and local government agencies to reclaim this piece of land. Her actions set off a major political legal scuffle for her entire tribe, which eventually results in the tragic loss of her family and the people close to her as well as endangering her own life and the tribal vice chairwoman's reputation.

Broken into five parts, Cradle-Blood-Song-Shelter-War, it's not until the final chapter that all these pieces come together revealing their relationship to one another and connecting the final story. But it's worth the wait.

Having lived on the Hopi Reservation for 31 years and having visited the Grand Canyon area twice a year, I could just picture the vivid and detailed descriptions of flowers, animals, forest vegetation and infamous "Blue Green Water" that Havasupai is known for.

Hirst showcases the Grand Canyon landscape so carefully and lovingly in the book. He even manages to accurately describe "secret tribal places" that may or may not exist.

This is not Hirst's first book focused on the Grand Canyon and the Havasupai people. Hirst wrote the award winning "I Am the Grand Canyon" during his years living in Havasu Canyon with his wife and daughter from 1967 to 1978. The book chronicles the ancestral land claim win for the Havasupai people from the federal government which eventually enlarged the area of the reservation.

Lauren Greasewater's War has also been selected as a ONEBOOK AZ 2014 winner. The book can be digitally downloaded from the ONEBOOKAZ site.

In the author's notes, Hirst describes this book as "a story written from my heart" and it succeeds in his written message through Lauren Gwi'Swaada's fictional story.

It's a wonderfully crafted read, a story that shows inner strength and courage in a young Native woman who also acknowledges her own personal fears and doubt about her own tribal origin and heritage.

Hirst and his wife live in Flagstaff full time and maintain their deep connection with the Havasupai people. The two also work as volunteer interpretive rangers for the Park Service.