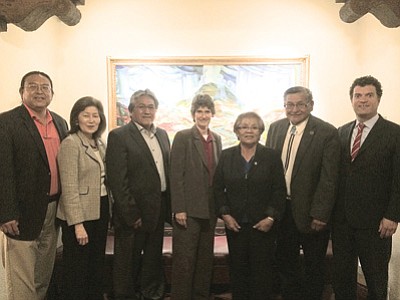 The statistics were used to demonstrate the disadvantages facing Navajo tribal members when it comes to basic necessities and economic development. Those figures were contrasted with the Nation's abundance of coal, more than 100 years worth, which is an economic boon and necessity for the tribe.

Recent air quality decisions by the U.S. EPA to limit the use of coal-fired power plants as an energy source have a negative impact on the tribal economy, Shelly said.

He said consultation with the U.S. EPA was absolutely critical for the proposed carbon dioxide ruling because the power plants located on the Navajo Nation provide tribal self-sufficiency.

"We just wrapped up the final BART decision for Navajo Generating Station and completed a very complex rulemaking," Shelly said. "Now we have the proposed carbon dioxide rulemaking before us."

He said the economy of the Navajo Nation is dependent upon coal power plants, not only for employment but also for revenue streams from taxes, lease payments and other royalties that support the direct services to the Navajo people.

Despite the push for restrictions on coal-fired plants across the country, tribal air quality has always passed standards set by the federal government.

"Ever since such data started being recorded, the Navajo Nation air quality has always been good," Shelly said. "Today, there is significantly less air pollution coming in from power plants on and near the Nation."

Blumenfeld commended Shelly for his "hard work for the Navajo Nation" and said Shelly will leave a lasting legacy for his work to protect public health and the environment.

"You are the most active tribal leader to advocate and conduct government-to-government discussions for every ruling," she said. "On behalf of the Obama administration, we are committed to working with the Navajo Nation as a sovereign entity and consider your comments before issuing a supplemental ruling."

In November 1984, the U.S. EPA enacted a policy for the administration of environmental programs on Indian reservations. The policy was in accordance with the Federal Indian Policy that was enacted on Jan. 24, 1983.

The main goal of the policy stated "that the federal government will pursue the principle of Indian 'self-government' and that it will work directly with tribal governments on a 'government-to-government' basis."

Because of this, Shelly said the U.S. EPA must carefully consider the tribal concerns and recommendations and make regulatory decisions that uphold trust responsibilities and obligations as a trustee.

He said the U.S. EPA needs to find a balance between economic development, progress and environmental protection that will allow the Navajo Nation to thrive in the years to come.

"We want to request for a public comment period extension from 30 to 45 days," Shelly said. "Don't treat us similar to states, we are different and deserve to be treated as a sovereign."