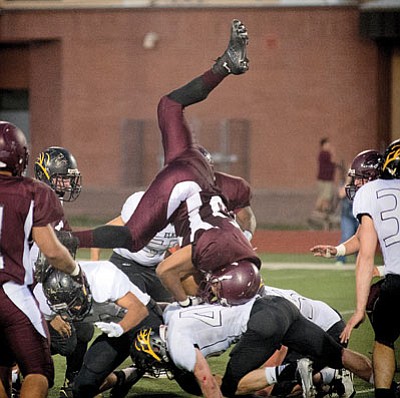 WINSLOW, Ariz. - The Round Valley Elks stayed undefeated at 3-0 when they visited Emil Nasser Stadium and ruined Homecoming for the Winslow Bulldogs 42-8 on Sept. 12.

The loss left the Bulldogs with a 2-1 record going into Friday's game with the Snowflake Lobos who also suffered their first loss of the season to the Seton Catholic Sentinels 23-14. The Sentinels are 2-1 for the season as well.

Round Valley scored the only touchdown of the first quarter when Ethan Workman ran three yards to complete a 35-yard drive. The conversion failed and the Elks led 6-0 heading into the second period.

The Elks increased their lead to 14-0 when quarterback Nate Guiterrez ran 11 yards for a touchdown to cap a short 36-yard drive and then ran for the two-point conversion.

The Round Valley defense got the next score when Sullivan Udall intercepted a Winslow pass and raced 85 yards for the touchdown. Clayton Merrill booted the conversion that increased the Round Valley lead to 21-0, which was the score at the intermission.

The Elks continued to control the game in the third quarter when Guiterrez hit Caleb Goodsell on a 16-yard scoring pass. The conversion increased the lead to 28-0. Workman scored his second touchdown of the game on a five-yard run. Merrill's conversion left the Elks with a 35-0 lead entering the final period.

Gutierrez got into the end zone for his second time in the game on a 56-yard run. He also passed for a touchdown. Merrill converted to end Round Valley's scoring and give them a 35-0 lead.

The Bulldogs got on the scoreboard on a nine-yard run from C. J. Chacon who also ran for the two-point conversion that made the final score 42-8 in Round Valley's favor.