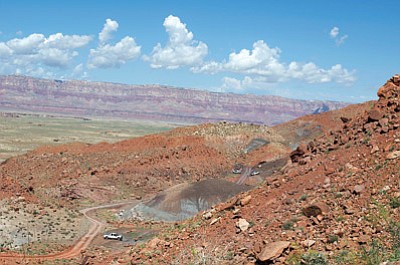 Material removed from above U.S. 89 is deposited below to create a buttress to reinforce the area. Photo/Anastasia Reynolds

PAGE - As manager of the Lake Powell/Page Days Inn and Suites, Traci Varner has grown used to the call: A customer heading here on U.S. 89 comes to a traffic barrier and "Road Closed" sign with 30 miles to go.

That confusion has been common, she said, since a February 2013 landslide knocked out the direct route, forcing a detour that she complains isn't marked as clearly as it should be. Those who miss it have to backtrack 25 miles and then take a temporary route, U.S. 89T, which follows what had been a dirt road through the Navajo Nation.

After more than a year of studying the landslide, making sure the area is stable, selecting a contractor and creating both an emergency and temporary road, the Arizona Department of Transportation recently began work to restore the direct route to Page and plans to complete the project by May.

That's welcome news to businesses in this community next to Lake Powell on the Arizona-Utah line, nearly 300 miles north of Phoenix.

Business has gotten better since the bypass was paved three months after the landslide and GPS systems updated the route, but Varner said the landslide has hurt business because of the perception that it's difficult to get here.

At the front desk of the Comfort Inn here, TheaRae Chee said she's excited to have the project underway. She receives calls from people who mistakenly hit the roadblock or think they simply can't reach Page.

"Every day we get five to 10 phone calls," she said. "It has affected business as far as customer service goes."

Chee also complained about what she considers inadequate signage informing motorists of the turnoff to 89T, which is next to a gas station across from The Gap Trading Post.

"If there was a sign we could put up we would," she said.

Dustin Krugel, an ADOT spokesman, said in an email that his agency has continually reviewed and modified signage since the landslide, including adding three directional signs this year at the request of the Page City Council.

"In total, ADOT has installed and removed more than 200 signs since the initial U.S. 89 closure," his email said.

Krugel also said ADOT has highlighted the detour to providers such as Google as well as GPS companies. He said motorists using GPS systems must download updates for directions to include the detour.

"We want people to know that Page and Lake Powell are open," Krugel said.

The $25 million project will restore a quarter-mile section of U.S. 89 covered by a massive landslide. It's in an area where the highway climbs through mountains between the junction of U.S. 89/U.S. 89A and Page.

ADOT's investigation found that the section was built atop an ancient landslide, though that wasn't known when the highway was built in the 1950s.

"Gravity has been pulling on this mountainside for eons, and it just happened to be time for gravity to win," Steve Monroe, ADOT's senior resident engineer, said during a media tour of the area.

Workers will remove 1 million cubic yards of earth from the slope above and move the road 60 feet toward the slope away from the active landslide area. The material removed from above will create a buttress below to stabilize the slope.

The plan is to have the direct route to Page reopened by May 2015 for those visiting Lake Powell and the surrounding area next year.

"The sooner we get this road repaired the better off all of the folks are," Monroe said.

For now, motorists heading to Page must travel 45 miles on what had been Navajo 20, a dirt road that was too rough for many vehicles before ADOT reached an agreement with the Navajo Nation to pave it at a cost of $28 million and label it 89T. It will return to the tribe's jurisdiction after U.S. 89 reopens to Page.

At the Lake Powell/Page Days Inn and Suites, Varner said she's happy to have work underway and that she understands why it's taken until now for work to begin.

"Once 89T was completed we got business back," she said. "We've had a great year this year."

Detour to Page open with no restrictions
U.S. 89 reconstruction effort on track for completion next summer
2013 Year in Review
ADOT to begin paving N20 in May
Transportation Board approves $1 million for Navajo Route 20 detour project
Event Calendar