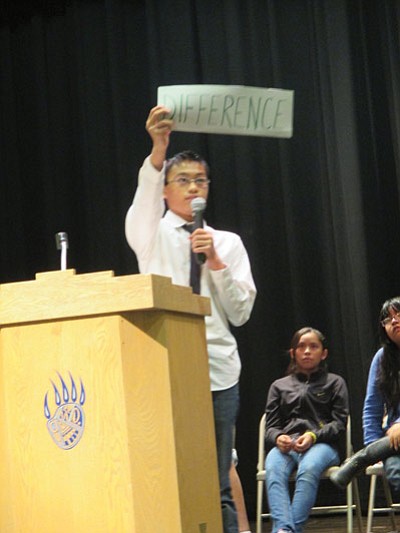 Hopi Junior High Principal Dauri Furgerson said she was so impressed with all the speakers that she sent each of them a thank you letter for their leadership and speaking skills.

"The student council election is an important part of social development because it teaches the students about leadership, politics and the voting process," she said.

Furgerson said after the junior high students voted that security guard Joshua Honawa brought the official ballots to her to be counted. She said the junior high staff handled the vote in a professional manner.

The vice presidential candidates were Kuautli Manuelito and Kaila Nez.

The only eighth grade representative candidate was Tristin Kaye.

The seventh grade representatives were Summer Johnson and Terril Humeyestewa.

Advisor Monica Kahe said she was glad that Hopi Junior High held this event because the high school doesn't have anything like it.

Bolus used props telling his classmates that he wanted to make a difference.