U.S. 89 reconstruction effort on track for completion next summer 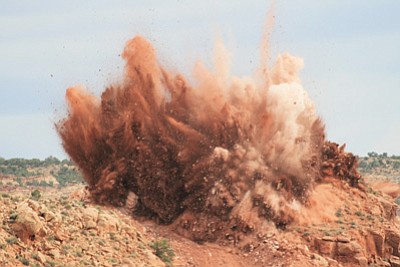 An explosion blows rock apart near U.S. 89. Crews are moving close to a million cubic yards of rock away from the landslide area that closed the road in February. Photo/Arizona Department of Transportation

PAGE, Ariz. - Reconstruction is underway on U.S. 89, which suffered extreme damage following a landslide Feb. 20 that buckled a section of the roadway between Bitter Springs and Page.

Despite some shifting of the area while the Arizona Department of Transportation (ADOT) puts in access roads using heavy trucks and blasts rocks at the top of the mountain, officials said the target date to finish the road is still scheduled for before the beginning of next summer's tourist season.

Deep cracks in the roadway came from the top of where the slide started to occur. Engineers are moving the roadway 60 feet to the east, away from the landslide area. But to do that ADOT must move about a million cubic yards of rock.

"The roadway will be off the active landslide area," said Dustin Krugel, public information officer for ADOT.

In addition, the rock removed will be used at the bottom at the buttress area, which has been designed to reinforce and stabilize the mountain slope that carries the roadway.

Blasting started on Aug. 11 on the very active construction site. With recent rain and heavy construction trucks using the access roads, some additional cracks developed. Activity at the site stopped and geo technical experts evaluated the site. Access to the site was reopened 24 hours later.

"The movement wasn't so much predicted as it is not unexpected," Krugel said. "The geo techinical experts think that until we get this buttress formed that area is going to have some movement because of the heavy equipment, the blasting and the rain."

The movement and area is monitored every day.

F and F Construction is the contractor for the project - the same contractor who built U.S. 89T, the temporary road used in place of U.S. 89 as work takes place. Krugel said a lot of the same workers are working on U.S. 89 now.

"We have a lot of local workers," Krugel said. "Particularly a lot of Navajo Nation workers."

More information is available at www.azdot.gov/us89.